Aslan Karatsev is a rising Russian tennis player. He made his professional tennis debut at the 2013 St. Petersburg Open. Aslan is yet to win major titles in his singles and doubles career. Karatsev won the Gold Medal in the 2017 Taipei Summer Universiade. He is currently ranked at no.63 in the Singles Category and ranks more than 400 in the Doubles category.

Aslan Karatsev was born Aslan Kazbekovich Karatsev on September 4, 1993, in Vladikavkaz, Russia. He has become very much successful in keeping his personal life away from the media. Aslan stands six feet and one inch tall and weighs 85 kgs.

What's the Net Worth and Career Earnings of Aslan Karatsev In 2021?

Since turning professional in 2013, Aslan has earned a reasonable amount from his professional career. He has an estimated net worth of more than $500,000. He made total earnings of $618,354 from both singles and Doubles games combined. 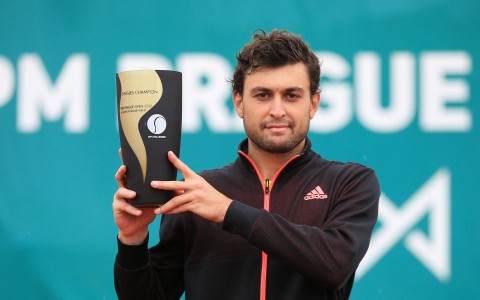 In 2021, Aslan has already earned $169,000 from the Australian Open doubles after reaching the competition's quarter-final. He will earn more if he keeps winning.

Karatsev is very much early in his career and shall be earning millions in the days to come. In 2020, he made more than $25,000 after winning Ostrava Open as his prize money.

Aslan Karatsev seems to be living a single happy life on his own. He is an active social media user and keeps posting photos of his games and his vacations. There have been no photos that lead us to his relationship status. He is yet to utter a single word about his relationship status. The tennis player likes to spend his free time with his family and friends exploring new places.

The Russin tennis made his professional debut at the 2013 St. Petersburg Open. He entered his entry to the main draw via a wildcard entry. In the Singles, Aslan lost the matches, but for the Doubles, Karatsev partnered with Dmitry Tursunov and reached the semi-final.

In the 2015 season, Aslan gained some confidence after making it to the Summer Universiade, where he won Silver Medal in the 2015 Gwangju Men's Singles and Bronze in the Mixed Doubles event.

Karatsev qualified for the Wimbledon and reached the Q2 round, where he lost. Shortly after that, he made it into the US Open, where he lost in the Q3 round. At the end of the season, he entered the World 200 ranking. In the following season, Aslan reached the Q3 of the French Open. Although He has not become successful in a significant tournament, Karatsev has won several titles in the Futures and Challenger Finals.

Aslan has won the nine singles title and four titles in Double. In 2017, Karatsev won the Gold Medal in the 2017 Summer Universiade in Men's Doubles. In 2021, He made it into the 2021 Australian Open and won his first top-10 victory after upsetting 8th seed and World No. 9 Diego Schwartzman in straight sets.