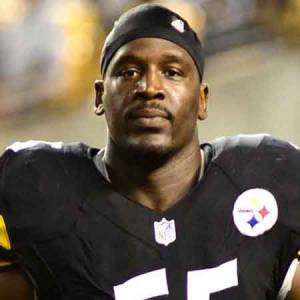 Arthur Moats is an American football defensive end who is currently not tied to any NFL clubs and is a free agent. His last club was the Arizona Cardinals of NFL with whom he had signed a one-year contract on July 25, 2018. Moats was drafted by the Buffalo Bills in the sixth round of the 2010 NFL Draft.

Moats is well known for exemplary works off the field just as much as he is known for his on-field presence. He is also the person to end the consecutive start streak of the Minnesota Vikings quarterback Brett Favre.

Arthur Moats was born on March 14, 1988, in Norfolk, Virginia to parents Arthur Moats Jr. and Rosalind Moats. He was raised in Portsmouth Virginia where he attended the Churchland High School. After graduating high school, he went to James Madison University where he graduated with a degree in political science.

Moats played college football during his time at the Madison University. He played the position of defensive end and played in all of the teams' games as a true freshman. He got the position of full-time starter on in his junior and senior years. He earned the 2009 Buck Buchanan Award as the top FCS defensive player. At the end of his collegiate career, he had recorded 208 tackles.

Arthur Moats entered the 2010 NFL Draft where he was selected by the Buffalo Bills in the sixth round and 178th overall. He was switched from the position of defensive end to inside linebacker. However, the change was not a fit for Moats as such, he was later shifted to a more natural position of outside linebacker.

Moats stayed at the Bills till the end of the 2013 season. During his time at the bills, he was named the team's Walter Payton Man of the Year in 2013. He also earned the Bill Ed Block Courage Award after overcoming an injury stats and exemplifying courage both on and off the field. He took part in the NFL Play 60 initiative and visited numerous schools during his time at the Bills.

The Pittsburgh Steelers signed Arthur Moats to a one-year, $795,000 contract with a signing bonus of $65,000 on March 24, 2014. He began the season as the backup right outside linebacker to Jarvis Jones. Moats got the opportunity to be the starter after Jarvis Jones was placed in the injured reserve after the sixth game. Moats became the starter for the rest of the 10 games of the season.

Moats ended the 2014 season appearing in all 16 games for the Steelers and starting in 10. At the end of the season, Moats had recorded 23 combined tackles, four sacks, and two forced fumbles. Moats signed a three-year, $7.50 million contract with a signing bonus of $1.90 million with the Pittsburgh Steelers on March 3, 2015.

In the 2015 season, Arthur Moats became the starting left outside ahead of rookie Bud Dupree. In the second game of the season, Moats helped his team to defeat the San Francisco 49ers by making three combined tackles and half a sack taking down the 49ers star quarterback Colin Kaepernick. At the end of the 2015 season, Moats had collected 35 combined tackles, four sacks, and two pass deflections.

The rookie Bud Dupree overtook the starting position of left outside in the 2016 season leaving Moats as the backup left outside.

The following year, Moats played exclusively on special teams for the first 12 games of the 2017 season. He covered the position of left inside linebacker along with Sean Spence and L. J. Fort covering for the injured Ryan Shazier and Tyler Matakevich on December 4th game against the Cincinnati Bengals and December 10th game against the Baltimore Ravens.

Arthur Moats is a married man. His wife is Shonda Moats who was his longtime girlfriend. He married Shonda in  2012. He is also a father and has three children, two daughters named Kaylor and Ava, and a son named Grey.

Arthur and Shonda first met each other at James Madison University and eventually started dating each other.

Net Worth of Arthur Moats

Arthur Moats' net worth at present remains unknown. over the course of nine seasons of his professional play, he has reportedly earned $11.39 million from his career. His salary for the previous season of 2017 was $2.88 million.

Moats is also known for his philanthropic works. He has donated a huge percentage of his earnings to various charity works.