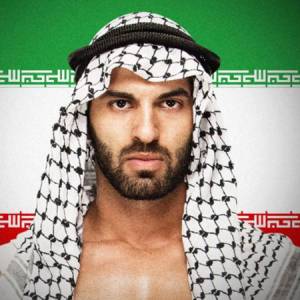 Ariya Daivari is a WWE-signed American professional wrestler, performing on the exclusive 205 Live cruiserweight brand. He started his wrestling career in September 2006 at a Midwest Pro Wrestling Academy event. The wrestler who has been struggling hard to establish himself as a popular wrestler has also featured in the video game WWE 2K19 as a playable character.

Also known as Sheik Ariya Daivari, Daivari's net worth is assumed to be over $500,000.

Ariya Daivari Net worth in 2019; How much does he Earn in Salary?

Wrestlers have this enormous lifestyle and luxury. They all live for the limelight as well as the fame they gather from all the matches they played. They need a huge amount of income to maintain all the buzz, and so does Ariya. Further, the salary of professional wrestlers starts from six digits and can rise high up to millions.

According to the sources, the salary of Ariya is not less than $100,000 but the actual figure is still behind the curtain. Further, his net worth is assumed to be over $0.5 million. In addition, he has some endorsement deals, along with a brand of watch namely Micheal Kors, from where he earns a huge amount of money.

Besides that, he goes for the huge vacations which his family and friends and live his life to the fullest.

Is Ariya Daivari Married? Know about his Life in Deep

According to the sources, Ariya is still on the singles club which is he is yet to be married. Further, there is no information about his probable girlfriend or wife.

Also, Ariya is a very secretive person and likes to keep personal life far from media and paparazzi. This can be one of the many reasons for the lack of information about his personal life.

Besides that, he spends quality time with his family and friends too. Often, he goes on a cruise and enjoys his best life. Also, he goes on vacations time to time for refreshments and relaxation. In addition, he adores and tags his brother as his best friends so he spends quality time with him too. From his one of the many posts of Instagram, he seems like a great fan of a 90's series "FRIENDS"

Talking about his body measurements, he is 1.78 m tall in height and his body weight is 190 lbs.

Aria Daivari was born on April 11, 1989, to the Iranian parents, whose data isn't available in the media, in Plymouth, Minnesota, United States. Further, Ariya holds the nationality of America and has the racial background of brown. Also, he has an elder brother named Shawn Daivari. In Addition, his zodiac sign is Aries.

Ariya Daivari's debut match was held in the First Avenue nightclub at a Midwest Pro Wrestling Academy event on September 26, 2006. He performed in promotions throughout the United States until his WWE debut in 2016, including Ring of Honor, Global Force Wrestling, and Total Nonstop Action's Ring Ka King India project.

Daivari's first WWE experience was wrestling at the Target Center in 2013 in a non-television match for WWE SmackDown. He participated in an experiment at the WWE Performance Center the following year. T. J Perkins, Rich Swann, and Noam Dar defeated Daivari, Nese, and Gulak on the pre-show of the Survivor Series. He then began a feud with Gentleman Jack Gallagher, which ended in a match he lost "I Forfeit."

Ariya teamed up with his brother Shawn Daivari in WWE Greatest Royal Rumble and insulted four prospects from Saudi Arabia before being driven out. Daivari returned on the November 28 episode of 205 Live after an extended break from the action to recover from an unspecified injury, joining Hideo Itami in an attack on a local competitor. On the April 23 episode of 205 Live, Daivari defeated Lorcan as the Cruiserweight Championship's number one contestant.