Ariel Hukporti is an extremely talented German-Togolese professional basketball player who has been showcasing his skills for the past few years. Since 2020, he is signed with the Nevezis Kedainiai (BC Nevezis) of the Lithuanian Basketball League (LKL). Before that, he used to play as a Power Forward for Riesen Ludwigsburg. He has even showcased his talent playing for the Germany U18 national team at the 2019 FIBA U18 European Championship.

Born in 2002, Ariel Hukporti celebrates his birthday on the 12th of April every year. He hails from the suburbs of Stralsund, Germany. Likewise, his birth name is Ariel Washington Hukporti, and his birth sign is Aries.

He is the son of Togolese parents. As per some sources, it is known that he was raised by a single mother. Other than that, there is no information as to his mother, siblings, and education.

Ariel Hukporti was not into basketball in his early years as he was more into playing football. But, when he realized that he could play basketball very well, considering his tall height, he decided to change his career. Afterward, he began learning the various tactics. 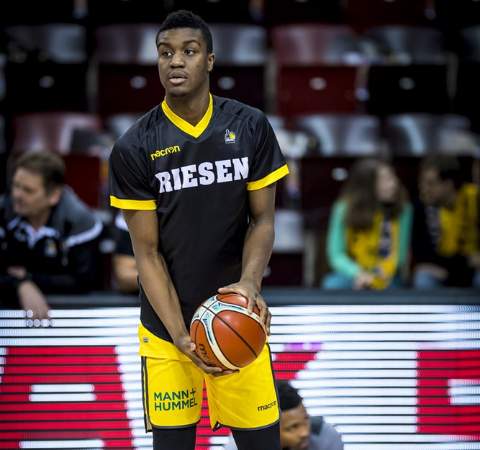 Later, he signed up with USC Freiburg and began playing in the Jugend Basketball Bundesliga, the German U16 league. In the one year that he spent there, he performed brilliantly and gained good stats. Soon, he began to receive offers from different teams. He decided to continue his career playing for the Riesen Ludwigsburg and its junior team, Porsche BBA Ludwigsburg.

Before he began playing for the team, he was selected in the national team to play at the 2017 FIBA U16 European Championship. Sadly, the Germany U16 team only reached the 13th-place. After the tournament ended, he played with the Riesen Ludwigsburg and gained a pretty good average (stats). In his first year with the team, he played in 13 games and averaged 6.62 points, 0.77 blocks, 0.92 steals, and 5.62 rebounds per game.

In 2018, he was once again called on national duty at the Albert Schweitzer Tournament—won a gold medal. In the same year, he played alongside the Germany U16 team at the FIBA U16 European Championship—reached ninth place.

Sadly, he couldn't perform with the same consistency for his club as he averaged only 2.96 points, 0.56 blocks, 0.28 steals, and 2.32 rebounds per game (played 25 games) in the 2019-20 season. As a result, he was released from Riesen Ludwigsburg after the season ended.

After he was released, he was signed by Nevezis Kedainiai (BC Nevezis) of the Lithuanian Basketball League on July 3, 2020. Since then, he has been playing for the team and has been performing well too.

Ariel Hukporti's exact earnings and net worth are still under review. However, as per some sources, it is known that the average salary of a professional basketball player starts from the lowest of $65,000 and reaches the highest of $100,000. Considering that amount, it can be assumed that Hukporti is well paid and his net worth is healthy.

Ariel is a Nike athlete- which means he has an endorsement deal with Nike and also gets additional benefits from the brand.

Hukporti's Personal Life; Who is he Dating?

The German-Togolese professional basketball player is very private about his personal life, so much so that he has even put his Instagram handle in private mode so that no one can interfere with his personal stuff.

In addition to that, there is no information that reveals if he is currently in a relationship or if he was dating someone in the past.