Ann Liguori is a well-known American television personality. The multi-talented sportscaster is a radio host, talk show host, journalist, author, and producer. Liguori is also a golf and tennis correspondent for CBS Sports Radio Network. Ann has worked and covered in six Olympics.

Ann Liguori was born in the early 1960s in Cincinnati, Ohio. She is very much private about her early life and her parents. Liguori spent her early days in Brecksville, Ohio. Her father worked as the Dean of Business Administration. After graduating from High School, Ann enrolled at the University of South Florida.

Ann Liguori has an estimated net worth of more than $5 Million. She has been working in the media industry for more than five decades. Ann is among the oldest working sportscaster in the American television industry. Liguori owns numerous brands and has launched numerous collections collaborating with different companies. 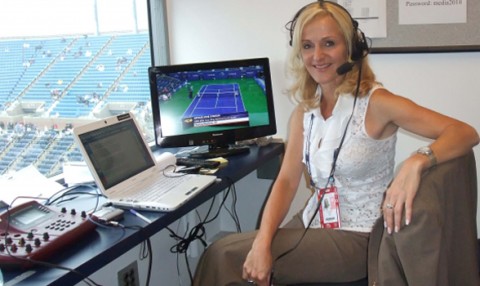 Ann shares a photo working on her desk SOURCE: Sports As Told

Liguori is an Ambassador for Cross Golf USA. She is the owner of Ann Liguori Productions and has worked with dozens of companies in the sponsorship arena, including CIT, Platinum Maintenance, American Portfolios, and a few more. Lately, She has been out of the media and is retiring from her professional career.

Ann Liguori is married to her longtime boyfriend, Scott Vallary. The love birds have been married for more than four decades. There is no single word about their marriage in public as they had a private wedding ceremony in front of their family members and close friends. Also, Ann has not shared a word about her love life openly.

Ann started her career working as a fellowship at the International Rdio & TV Society in June 1982. Shortly after the fellowship, She joined CBS Sports as a production assistant. In the following year, The sportscaster worked in the U.S. Open Tennis Championships for HBO and Wimbledon as a statistician.

In July 1984, Liguori hosted her first Olympics game for the ABC Radio Sports Network as a studio host, reporter, and/or color commentator.

In 1987, Ann became the first woman to host a call-in sports show on WFAN. After spending almost two decades in the field, Liguori became the first and only female sports broadcaster to win Association for Women in Communications Headliners Award.

In addition to her entrepreneurial and philanthropic work, Liguori is a media/marketing consultant for Independent Group Home Living (IGHL).

In 2008, The media personality founded the Ann Liguori Foundation to raise money for cancer prevention and cancer care. In 2012, She was honored with the Debbie Gibson Girls Humanitarian Award and named one of the top women in sports media by the Los Angeles Daily News. In 2018, Ann launched an experimental jewelry Company named Dune Jewelry under Hamptons Collection.