Andrew Stueber is a rising American football player. He is currently playing in the National Football League for the New England Patriots. The Patriots drafted Andrew in the 2022 NFL draft at the seventh round overall 245h pick. Stueber plays as a guard for his club.

Andrew Stueber was born in Darien, Connecticut, on July 1, 1999. He rose to fame only after his successful career and has not shared much about his parents and early life information. Andrew graduated from Darien High School and enrolled at the University of Michigan. Regarding his physical appearance, Andrew stands six feet and seven inches tall and weighs 147 kg.

Andrew Stueber has an estimated net worth of more than $1 Million. He credits most of his net worth to his salary and contract with the Patriots. A football player has multiple sources of income. They make a good sum from their sponsorship and advertising deals. 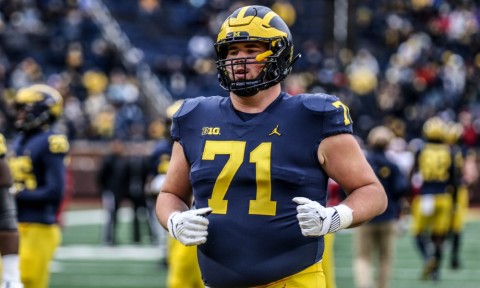 Andrew signed a four years contract with the Patriots. He as a base salary of $705,000 while playing for the club and received $20,000 as his signing bonus. In the 2022 season, Stueber took home $935,000 as his salary. He is very early in his career and will make millions in the future. His teammates, Matt Judon and Jonnu Smith, are among the highest-paid player for the club.

Who is Andrew Stueber Dating? Know About His Girlfriend and Relationship Status

Andrew is very private about his relationship status. The American football player has not publicly shared much about his love life. Stueber is an active social media user and keeps sharing his personal life photos on his timelines. Following his timelines, Stueber could be single, dating or even engaged to his fiance.

Journey to the NFL Draft and Picks

The player had a decent start to his college career. He appeared in just one game as a special team contributor. The player appeared in thirteen games for the 2018 season and became a regular team member. Stueber suffered a torn ACL in training camp and missed the junior season. In the final year, Andrew played in fourteen games and won Joe Moore Award, given to the top offensive line in the nation. He was named into the First-team All-Big.

After graduating from the University, Andrew listed his name for the 2022 NFL draft. The New England Patriots drafted Stueber in the seventh round overall 245th pick. He signed a four-year contract worth $3.7 Million. The player is yet to make his NFL debut.