Andrea Belotti was born on December 20, 1993, in Calcinate, Italy. He is among the two children born to Roberto Belotti and his wife, Laura Belotti. His father was a builder and grew up with his younger brother Matteo, a chef and a well-known restaurant owner in Italy. Belotti stands five feet and eleven inches tall and weighs 72 kg.

Andrea started playing football from his early days. He played in the oratory school of Gorlago with Grumellese. Belotti wanted to join Atlanta junior club, but after having an unsuccessful attempt, he signed with Albinoleffe and went through their youth system. Andrea debut for the youth in 2011 and played in eight matches.

In 2012, Andrea made his debut in the senior team, played for two seasons, and appeared in thirty-nine games. In 2013, Palermo signed him as their new striker. He played with the team until 2015 and scored sixteen goals appearing in sixty-two matches. At the end of 2015, Palermo loaned him to Torino for $700,000 with a buyout clause set for $3.5 Million. He closed the season with ten goals scored in the league.

Andrea made his Serie A debut in August 2014. In 2015, He signed an entire contract with the team for more than $10 Million. Belotti ended his 2015-16 season with 12 goals in thirty-five games. In December 2016, He extended his contract with Torino until 2021, with a $120 million release valid only to foreign clubs.

Belotti made his national team debut in 2011 in U-19. In 2016, he was called up for the senior squad and made his senior international debut in the friendly against France. In June 2021, he was included in Italy's squad for UEFA Euro 2020 under the head coach Roberto Mancini.

Andrea tied his wedding knot with his longtime girlfriend, Giorgia Duro, on June 15, 2017. They had been dating each other for several years before their marriage. Shortly after the wedding, the duo welcomed their first child, Swabian. in March 2018. 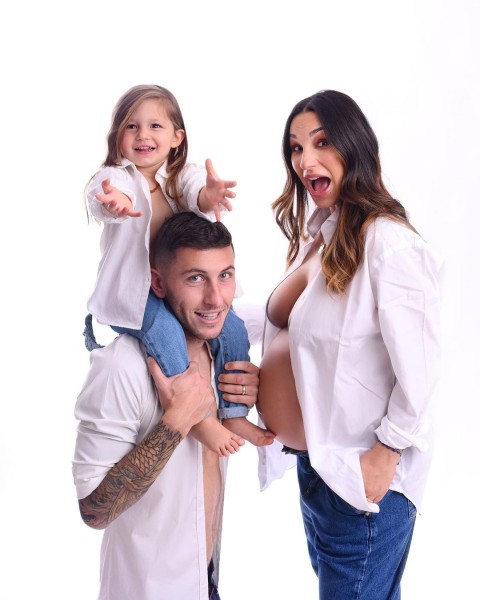 Andrea along with his wife and their daughter SOURCE: [email protected]

In early 2021, Boletti opened about expecting a second child. In February, Andrea and Giorgia welcomed their second child, a daughter, Vittoria.

Andrea Belotti has an estimated net worth of more than $20 Million. He has been earning much of his net worth through his successful career as a football player. Also, Belottia must be making a handsome amount through the Italian government representing the national team in numerous international tournaments. Andrea has an annual salary of $3 Million. His weekly wages are $80,000. He earned $2.5 Million as his salary in 2020.