Anatoliy Trubin is a professional football player from Ukraine who currently plays in Ukraine's top league, the Ukrainian Premier League. He plays in the goalkeeper position for the club Shakhtar Donetsk and has been playing for them since 2019.

In his career, he has already become 2 times champion of the Ukrainian Premier League. He won the league with Shakhtar in the 2018-19 and 2019-20 seasons. He also won the Ukrainian Cup in 2018-19. Individually, he was also named in the UEFA Champions League Breakthrough XI in 2020 while being named in the World Team of IFFHS Men's Youth in 2021.

Recently, in 2021, he was included in the national team of Ukraine. Before, he also played for the Under 17, Under 19, and Under 21 teams of Ukraine.

Anatoliy Volodymyrovych Trubin, famously known by the name Anatoliy Trubin was born on August 1, 2001, in Donetsk, Ukraine. According to astrologers, his birth sign is Leo. 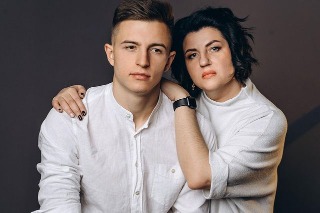 Read: How much Rich is Jordan Pefok in 2022? (Net Worth, Salary, and Contract)

He was born to his mother Alla Trubina and his father whose name is not revealed at the moment. Additional information regarding his parent is not revealed. But he frequently shares his family photo on his social media, most of them on special occasions.

"My mother @alla.trubina1980 is my friend, assistant, adviser, my support and support. I share all my achievements with my mother. She knows better than anyone what victories cost and how difficult it is to go to them. Thank you, dear mommy, for everything. I love you very much! Happy Birthday"

As per him, family is his main priority. He once posted his photo with his mom and sister where she posted,

"Family is the main thing in life. The most important people are those who are waiting for you at home."

He is not the only child in Trubin's family. He also has a sister named Nastya. He is elder than his sister. He is close with his sister but she won't listen to him.

He said, "As an older brother, I can give a couple of instructions, but I won’t. You are so old that you won’t listen. "

Born and raised in Donetsk, he joined his hometown club, Azostal-2 Mariupol where he joined in 2013. At that time, he was just 12 years old. 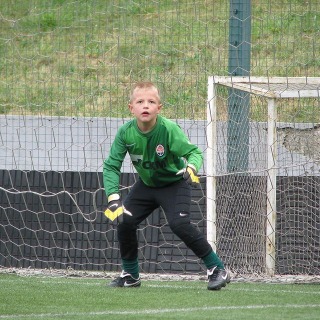 Then in 2014, he joined his current club Shakhtar Donetsk. He played for their youth team for 5 years.

He has also played for Ukraine's national team since 2017.

His weight is recorded to be 88 kg.

Trubin's Net worth and career earnings

As per sources, the net worth of the Ukrainian goalkeeper is estimated to be $1 million approximately. His net worth and properties include his monetary values, cars, houses, assets, and others.

He mostly earns from his career of playing football with Donetsk. Till now, he has not been able to land any major sponsorship and partnership with any brands But he is a very young player who has a very high possibility to succeed in the future. So, he is not the one to be ignored by brands and companies. 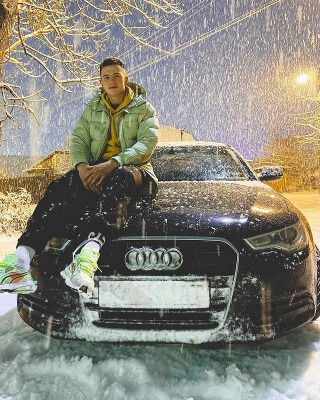 He sometimes flexes his cars, houses, and lifestyles on his Instagram. He currently owns a Black Audi car which costs more than $50,000.

According to the transfermarkt, his market value in 2022 is 8 million pounds.

His market value has been growing as he is a young talent.

Is Anatoliy dating anyone or already married?

Shakhtar's young goalkeeper Trubin Anatoliy is currently having a romantic relationship with his partner Galaag Ann. The couple has been together for more than 2 years as of 2022.

The couple started dating back in November of 2018. Though it is not sure when and where the pair met for the first time. 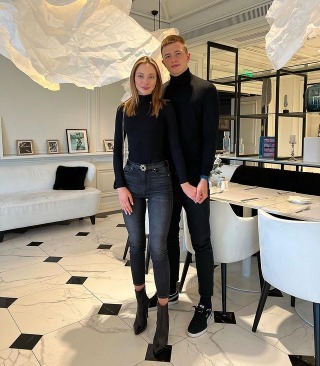 He likes to share a photo with his sweet partner and often shares and wishes her, especially on different occasions.

On November 9 of 2021, he posted a sweet message for his partner wishing her on her special day. He said,

"I know that you would like to hear these words in your ear in the morning. But... You know my schedule of training camps and matches, probably even better than me. I will try to always have a smile on your face, and that all the best awaits us ahead And of course I love you very very much. Happy birthday @galaagannn my love."

Trubin's girlfriend is a cute girl who is famous for becoming the partner of the Ukrainian young goalkeeper, Anatoliy.

She celebrates her birthday every year on the 9th of November. Trubin never forgets to wish his partner on her special day. Galaag is also an active social media user who uses Instagram with the username @galaagannn where she has more than 6,302 followers. We could not exact further information as she has kept her Insta profile private.

His most posts are about his games, training, and time with friends and families.