Amir Al-Ammari is a professional footballer hailing from Jönköping, Sweden, who primarily plays as a midfielder and wears jersey number 6. Currently, he plays for the team of Allsvenskan club IFK Goteborg. Apart from his professional club career, Al-Ammari has also represented the Iraq national team, but before that, he represented the Swedish team at the youth level.

The young football player began his career at a Swedish club. He is an academy graduate of Husqvarna FF who was first called up to the team of Iraqi national under-23 football in March 2019 for the 2020 AFC U-23 Championship qualification. Moreover, Al-Ammari has played in every one of the club's 10 Allsvenskan matches in 2021, starting in all 10.

Take A Look At His Early Life and Family Background

Al-Ammari was born Amir Fouad Aboud Al-Ammari on July 27, 1997, making his age 24 years old. He is a native of Jönköping, Sweden. So, we can say that he holds Swedish nationality and peaks at the height of 6 feet 1.82m). 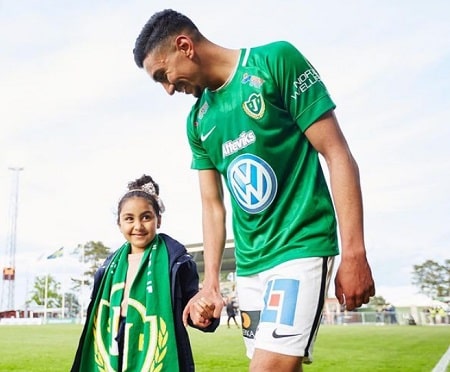 It seems like his parents are from different nations. Reportedly, from his father's side, Al-Ammari is eligible to play for the team of Iraq. However, the names of his parents are missing from the web as Al-Ammari has not given much info about his family background.

The 24-years-old footballer was interested in playing football from an early age, and he aimed to pursue a career in it. So, Al-Ammari began his youth career with Swedish clubs IFK Öxnehaga and Husqvarna FF before moving to Denmark to enter the youth academy of Brøndby IF. And in March 2017, he returned to Husqvarna, where he began his senior career.

On December 11, 2017, Al-Ammari it was revealed that Al-Ammari had signed a three-year deal with Jönköpings Södra IF. In December 2020, he left the club following the end of the 2020 Superettan season. And newly promoted Allsvenskan side Halmstads BK revealed they had signed Al-Ammari on February 14, 2021. Furthermore, his professional debut came on April 11, 2021, in the match against BK Häcken.

Apart from his club career, he has also played for the national teams and has represented them in some international events too. The 6 feet tall footballer has played four friendlies for the Sweden under-19 team in 2014 and 2015. Likewise, in March 2019, he played for Iraq under-23 team in the 2020 AFC U-23 Championship qualifiers. 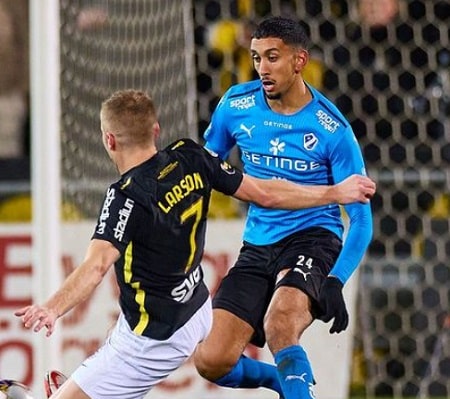 So, he scored two goals in three matches and helped his team qualify for the main tournament. Furthermore, he was able to impress other people, and in January 2020, Al-Ammari was selected for Iraq's squad for the 2020 AFC U-23 Championship. Moreover, his first international cap with Iraq came on September 2, 2021, in the match against South Korea in the 2022 World Cup qualifiers.

Amir Al-Ammari Salary and Net Worth In 2022

Al-Ammari began his football career at a very young age as he was passionate about it. For a long time, he has been actively playing football and has played for various clubs. Al-Ammari has an incredible life due to his devotion and hard work. So, Al-Ammari might be receiving a fair sum of money from his current team.

Not to mention, an average salary of a footballer in Iraq is around $11899.71 per year. So, Al-Ammari might be making above the average wage as he has been in this field for a long time.

According to Transfer Market, his current market value is €700Th. Considering this fact, we can speculate his net worth ot be around $500,000 to $1 million. Likewise, he has represented his team at various levels and has also given great performances. So, his performances might have helped him win some cash prizes too.

Being one of the most prominent footballers in his nation, Al-Ammari might make some profit from sponsorship and endorsement deals. Exploring his social media posts, we can see that his team has worked with various renowned brands, including Volkswagen and puma. So, working with these brands, they might have paid him well. As of early 2022, he has collected over 162k followers on his Instagram handle, and if he does sponsor posts there, then he has a chance to earn around $494.25 - $823.75 from a single post, as reported by the Influencer Marketing Hub.

Love Life: Does He Have A Girlfriend?

Moving into his love life, the midfielder seems to be leading a single life. So, he does not have a girlfriend or a wife. Till now, Al-Ammari has not made a single post regarding his love life on Instagram. From this, it becomes clear that he is currently focused more on his career rather than getting involved in romantic affairs.

Furthermore, Al-Ammari may get a loving partner in the future, and he may give some updates as his fans are always eager to know about his lover. So, to get more updates about him, we can follow him on Instagram, where he is verified under the username @amiralammarii.

Al-Ammari has a strong presence on social media, and he is an active user of Instagram. His first post on Instagram was made on April 21, 2019, when he shared a clip of his own football match. Apart from that, he appears to be using Twitter as @amiralammari, but this does not seem to be his official account as it is not much active as Instagram.

So, Al-Ammari flaunts and updates everything about his ongoing lifestyle from his Instagram account. At the time of this writing, he has also followed 216 people.