American Football Coach Bret Bielema Happily Married To Jennifer Hielsberg in 2012, How Well Are They Doing In Their Married Life? Do they Have Any Children? 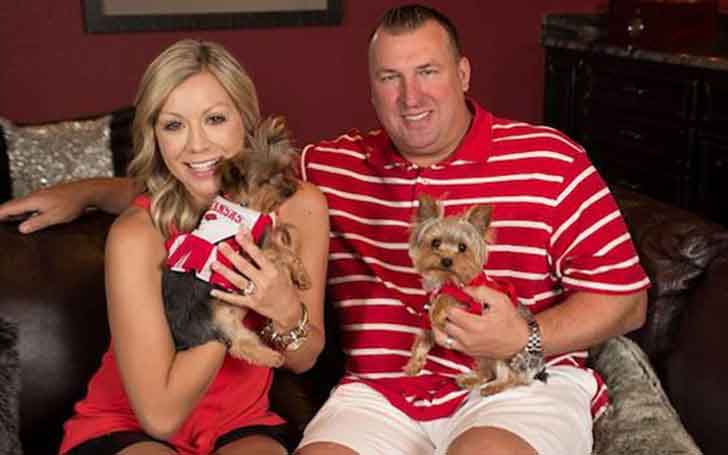 Bret Arnold Bielema, professionally known as Bret Bielema, is a college football coach based in the United States. A married man, his wife is Jennifer Hielsberg and they have been married since 2012. As of now, they also have a child together and have an adorable family of three.

Bielema was born on 13th January 1970 and is 48-years-old. As a coach, he has served as a head football coach for the University of Arkansas and the University of Wisconsin-Madison with an ending records of 29-43 and 68-24 respectively.

Keeping his professional life aside, here we are going to share some details related to his marital life with wife Jennifer Hielsberg, and his children.

Bret Bielema's Marital Life with Wife Jennifer Hielsberg: How Long Have They Been Together?

American college football coach Bret Bielema is currently married to his wife Jennifer Hielsberg who is a Caucasian model. According to sources, the duo started dating back in 2007 after meeting in Las Vegas. They met at the Wynn Casino where Bret was playing blackjack and since Bret found Jen very interesting and introduced himself to her.

After 5 insanely long weeks at the hospital for elective heart surgery, and finally home for 5 days, this was last Sunday. We're blessed and extremely lucky to have my dad with us. If you don't know my dad, he's simply the best! My heart is full with the overwhelming love, support and encouragement from so many, some of whom I've never met. We will forever be grateful!

At the time, Jen was in a relationship with another man. But eventually, things took a drastic turn and they started dating in the same year. They dated for four years before Bret popped the question to her.

On 1st April 2011, the duo was officially engaged and got married to each other, a year later on 10th March 2012  in a Catholic style wedding.  As of 2018, it has been six years since they got married and over a decade since they first started dating.

In Sarasota, FL one month ago last night. My dad is the best! A heart of gold. He's fighting for life, but slowly doing better. I can't wait to see his smile again, hopefully soon. Off paralytics today - #daddysgirl #thankyouECMO

Despite being together for such a long time, they still have a very loving relationship. The married couple makes numerous appearances together in public events while Jen also loves to share pictures of herself and her loving husband on social media.

Likewise, despite being together for over a decade now, there are no rumors about the couple separating or getting a divorce.

Bret Bielema and Jennifer Hielsberg Have a Daughter Together

Two years ago, four years into their marriage, the Jennifer announced via her Twitter that she has her coach husband were expecting their first child together.

Happy FIRST Birthday, Briella! You are our world and watching you grow continues to melt our hearts each day. L-O-V-E you, so much!

Beyond anything @jenbielema & I could ever dream of as parents. Please welcome Briella Nichole Bielema born 4:44 AM on 7/8/17 weight 7.8 lbs pic.twitter.com/SQ0fL3Aa7C

Bret even shared the happy news on his Twitter sharing his first picture, name and other details in the captions. As of now, young Briella is a year old and proud mama Jen's Instagram is filled with pictures of her lovely daughter.