Aly Wagner is an American former soccer player who currently serves as a sports broadcaster and also the tv/radio analyst of soccer.boom. During her playing career, she played as a midfielder for Los Angeles Sol of Women's Professional Soccer and the United States women's national soccer team.

Aly Wagner was born as Alyson Kay Wagner on August 10, 1980 (age 38 years), in San Jose, California, United States. Born to parents Vicky Wagner and Dennis Wagner, her father was a coach at the Central Valley Express who led the team to the U-17 girl's national championship in 1995.

Her two brothers Jeff and Jered, and her sister Sam are also the soccer players. Sam played soccer at UC Berkeley.

Aly Wagner Salary and Net worth

Aly Wagner reportedly earns about $50,000 as annual salary as a sports analyst. She has an estimated net worth of around $500,000 in 2019. Her only source of earning currently is her profession as a sports journalist.

Incredibly excited to be a part of @VW Partnership announcement with @ussoccer! As a mama of four, I couldn’t be more happy in VW’s commitment to support soccer in the US. #VWOneGoal #NAIAS2019 #NAIAS pic.twitter.com/9Fygb2nbCB

Prior, she formerly played soccer for several Women's Professional Soccer clubs. She reportedly earned around $60,000 as annual salary as a player. She made around $200,000 earnings from her playing career. Moreover, she is also a member of the national team that won 2 Olympics in 2004 and 2008.

Wagner might have received a huge amount for the Olympics achievement.

Wagner starting playing in her hometown of San Jose at the age of five with the Central Valley Mercury of the Central Santa Clara Valley Youth Soccer League. She attended Hillbrook School and Presentation High School where she played soccer and also helped the Panthers win the Central Coast Championship.

Wagner has won two Olympics gold medal with the national team in 2008 and 2004 during which other American soccer players like Christie Rampone was also her teammate.

The former soccer midfielder then worked as a soccer analyst for Fox Sports and ESPN. She also commented on the FIFA Men's World Cup game on U.S television as an analyst alongside Derek Rae. Moreover, she also works as the tv/radio analyst of soccer. boom.

Aly Wagner is married to her husband Adam Eyre. The couple tied the knot in December 2006 and has been together since then.

Her husband Adam is a former soccer player who played at Santa Clara University and has also briefly played with the Major League Soccer team New England Revolution. 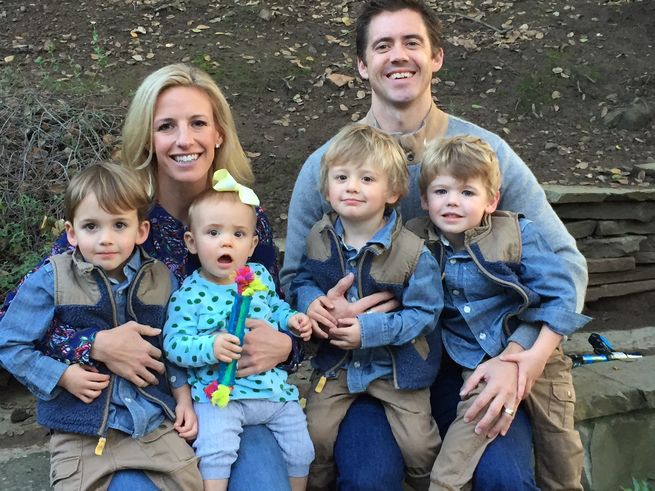 Adam and his girlfriend turned wife, Aly are the parents of 4 children. Aly gave birth to the triplet sons, Griffin Charles Denis, Daeven Nicholas, who are now 5 years old.

The couple also has a daughter named Lincoln Wagner aged 3.