Alonzo Theodoro Menifield better known by the ring name Alonzo Menifield is an American professional MMA fighter who is signed to the Ultimate Fighting Championship (UFC), under the Light Heavyweight division. A professional fighter since 2015, Menifield has previously competed at Bellator MMA and the Legacy Fighting Alliance.

A native Los Angeles, California, Alonzo Menifield was born on 18th October 1987, under the star sign Libra. The thirty-two years old holds an American nationality and is of Afro-American ethnic background. Regarding his physique, he stands 6 ft 0 in (1.83 m) and weighs 205 lb (93 kg; 14 st 9 lb).

How Much Is Alonzo Manifield's Net Worth In 2020?

Fighting out of Dallas, Texas, Menifield has summoned a decent sum of money through his career. Presently signed to UFC, where he makes a base salary and Reebook sponsorship no matter if he wins or loses after every fight. Furthermore, there is a win bonus for winning fighter and not to mention the fight of the night bonus which is usually $50k.

Before joining UFC, he fought in Bellator and the Legacy Fighting Alliance which also pays its fighter a decent sum. As of 2020, his net worth is $0.2 million.

Alonzo and wife, Crystal knew each other but never dated: they met at Texas A&M University. As reported, one fine day Alonzo started liking Crystal's pictures on Instagram and Crystal messaged him first. Crystal said. "Then he asked for my number. Then we went on a few dates. Three years later we were married." 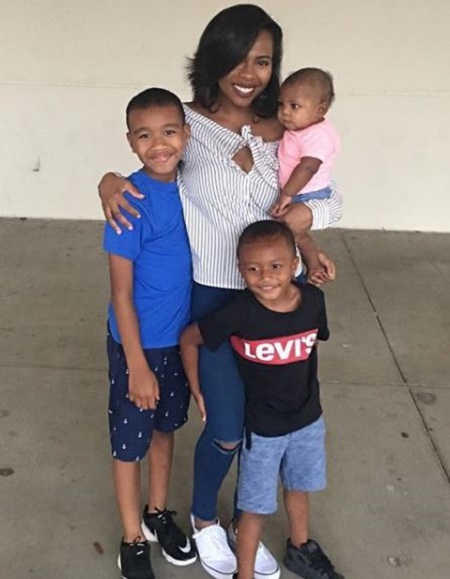 Now, the couple are blessed with three children: two sons, Alonzo ans Xavier as well as a daughter. The Menifield currently resides in Plano.

Had A Rough Childhood

Alonzo Menifield was raised by his mother alongside his brother after his father passed away. As he cycled through temporary foster homes, he and his brother, Cecil, were adopted by Godwin Ezenwa, who helped Menifield graduate from high school and move on to college.

Menifield played football at Texas A&M Commerce in 2007-08 after transferring from a junior college. He graduated from there and also started MMA training at a local academy.

On 19th January 2019, Menifield made his UFC career debut at UFC Fight Night: Cejudo vs. Dillashaw against Vinicius Moreira. He won the bout in the first round via TKO punches. His second fight was against Paul Craig on June 29, 2019, at UFC on ESPN: Ngannou vs. dos Santos.