Alexis Morris is a rising American college basketball player. She is currently playing in the Southeastern Conference for the Texas A&M Aggies Women's Basketball team. Morris plays as a Guard for her team and is currently in her junior year. Alexis made it to the 2018 Big 12 All-Freshman Team.

Alexis Morris was born in the late 1990s. She has not shared her birthdate in public. Morris rose to fame only after her basketball career; so much about her parent is under the radar. Alexis graduated from Legacy Christian High School and enrolled at Texas A&M University. Talking about her physical appearance, Morris stands five feet and six inches tall and weighs 65 kg.

Alexis played numerous sports in her middle school. She represented her High School's Basketball team in junior and senior years. Morris was selected as the 2017 Texas Gatorade Player of the Year and four-time Texas Association of Private and Parochial Schools 3A Player of the Year. The player totaled 3,369 points during her high school career. Morris completed her senior year with 6.3 rebounds, 4.9 assists and 4.8 steals per contest. 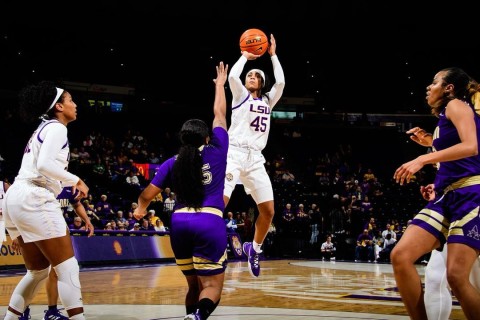 Alexis tries to score a point in an SEC game SOURCE: [email protected]

Alexis graduated from High School with 3,369 points. She got to play in the  Jordan Brand Classic and the McDonald's All-American game. After graduating from High School as a five-star recruit. The player enrolled at Baylor University. In her freshman year, Morris played in thirty-four games and averaged 9.4 points, 3.4 assists and 2.9 rebounds. Alexis moved to Rutgers Scarlet Knights for sophomore year and appeared in seven games.

Morris moved to the University of Texas A&M for her junior year. She played in 20 of the Aggies' 28 games this year, averaging 6.0 points, 1.3 rebounds and 1.3 assists per game. In the SEC Tournament, She averaged  12.0 points, 2.5 rebounds and 2.5 assists. The player transferred to Los Angels Tigers for the senior year and is having a decent season. She is among the highest-rated player for the upcoming WNBA draft.

Who is Alexis Morris Dating? Know About Her Boyfriend and Relationship Status

Alexis is about her start her professional career. NCAA bans its universities in to pay their athletes with salaries. The universities help their athletes with scholarships to cover most of their expenses. The salary of a first-round pick in the WNBA draft is more than $200,000. Morris will be adding a huge net worth in the future. A player earns a huge sum from advertising and brand endorsement deals.