Alexander Zverev Jr. is a professional German tennis player. Moreover, the hunk is the second-youngest player ranked in the top 10 by the ATP and was a permanent fixture in the top 5 throughout 2018. He has won 11 ATP titles in singles and two in doubles.

For the first time, he entered the ATP top-10 after defeating Novak Djokovic in the final of the Italian Open. Moreover, it was his first victory at the Masters 1000 title too.

How Much Is Alexander Zverev Jr.'s Net worth In 2021? Know His Career Earnings

Earlier, his net worth was reported as $6 million, totally worth it.

Alexander Zverev and his car

Currently 25, Zverev is neither married nor engaged in his personal life and affairs. He was in a relationship with his girlfriend, Belinda Bencic. The couple attended the parties and events together and was also captured having dinner together several times. 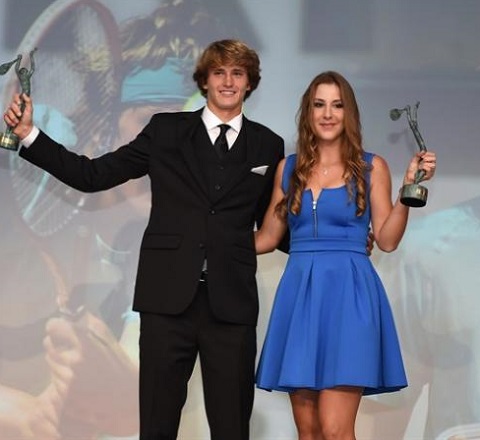 His former girlfriend Belinda Bencic is also a Swiss Tennis player. There have been several rumors of the player dating Olga Sharapova in 2020.

Twenty-five-year-old Zverev has a perfect height of 1.98 m and weighs 86 kg. His nationality is German, and his ethnicity is white.

Alexander Zverev Jr. was born on April 20, 1997, in Hamburg, Germany. He was born to Alexander Zverev Sr. and Irena Zvereva, former Russian tennis players. His father played professional tennis in the Soviet Union.

He grew up along with his sibling brother Mischa Zverev, a professional tennis player. From an early age, he started playing tennis along with his parents and brother.

During his junior career, Zverev was the world's no. 1 player. He competed in the 2013 French Open, 2013 Jr. Wimbledon Championships, and 2013 Jr. US Open but failed to win the tournament. Surprisingly, he won the 2014 Jr. Australian Open.

In 2015 he participated in most of the tournaments but failed to get a victory. Because of his best performance, he was ranked the world's number 10 player. The following year he won the ATP Challenger Tour title at Heilbronn.

In 2016 he lost Italian Open in the second round to Roger Federer. He won his first ATP title and became the youngest player to enter the top 20. Coming to 2017, he won his first master's title beating Novak Djokovic in the finals. After his win, he became the youngest player to win the master's title. Moreover, he also got the world no. 10 rankings.