Alexander Georgiev's Net Worth and Salary

As of 2019, Alexander Georgiyevich Georgiev has an estimated net worth of over $1 million which is same as that of Pavel Zacha of the Devils. He reportedly signed a three-year contract worth $2,775,000 with New York Rangers on 18 July 2017.

Besides his financial earnings, his personal assets include cars and home. In addition to this, he also earns a good amount from various sponsorships.

My go to dinner outfit. And the pose #thatway??

He hasn't shared anything about his probable girlfriend but in one of his interview with the hockey writers website, he mentioned about his girlfriend and said that his father and girlfriend are coming to watch his game which was held in the United States.

The Famous NHL star is 6 feet 1 inch in height and weighs around 82 kilograms. Alexander Georgiyevich Georgiev is not only a world-class athlete but also has a very attractive individual.

Alexander Georgiyevich Georgiev was born on 10 February 1996, in Ruse, Bulgaria bit the details about his parents and family life aren't disclosed yet.

As per his nationality, he is Bulgarian and belongs to the White ethnic group and his star sign is Aquarius.

Alexander started his professional ice hockey career with the New York Rangers In 2017 after being undrafted in the 2017 NHL Entry Draft. He started his journey by playing in the training camp of Rangers and later on he signed a three-year contract with them on 18 July 2017. 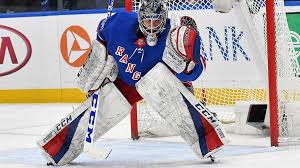 Currently, he is playing alongside Brady Skjei who plays as a defenceman of the team and Ryan Strome who is the centerman of the Rangers.

On 10 February 2019, he recorded a career-high 55 saves in a 4–1 victory against the Toronto Maple Leafs, becoming the goaltender with second-most saves in a game in Rangers' history, on the other hand, also setting a record for most saves in regulation.