Alex Bowman is a professional car racing driver who currently competes in NASCAR Series Cup. He drives a No. 48 Ally Chevrolet for Hendrick Motorsports since 2017. He replaced legendary racer, Dale Earnhardt Jr., in Hendricks.

Who is Alex Bowman?

Alex Michael Bowman was born on April 25, 1993, in Tucson, Arizona, United States. His father's name is Sean Bowman who owns a shop in Arizona. Sean is a great supporter of his son's driving career and has played a major role in Alex's career.

Alex's height is 6 feet 1 inch and his birth sign is Taurus. He currently resides in his birth town, Tucson, Arizona.

Alex Bowman Net worth and Earnings

Alex Bowman's net worth is estimated to be around $5 million. Most of the earnings come from his racing career. It also includes different sponsors and deals with various brands.

In 2017 he officially became the driver for Hendrick Motorsports and later he signed a multi-year contract extension worth millions in June 2021. 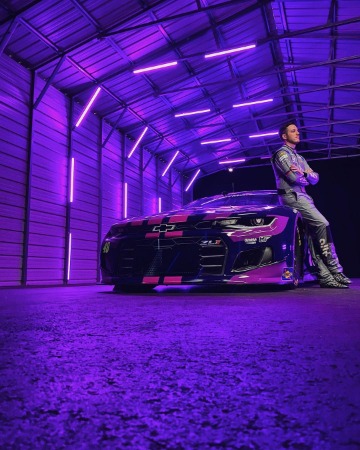 Bowman also earns from different sponsors while Nationwide becoming his primary sponsor. In addition, Axalta Coating Systems, LLumar, and Valvoline are his other sponsors.

The 2011 K&N Pro Series East Rookie of the Year is living a lavish life with his family in Arizona. As of 2021, he is just 28 years old and surely, he will earn more in the future.

Who is Alex Bowman dating?

Alex Bowman is currently dating his longtime girlfriend Emily Boat. The couple has not married yet but they are having their best love life with each other. Emily frequently appears with her love to support him in his career.

Even before dating, Boat was Alex's biggest fan and used to admire him. She was with him before Bowman replaced Earnhardt. The couple, Emily mostly shares their photos frequently on social media. The pair never shy to show their love on their social media and praise each other frequently. Alex's girlfriend Emily is also from a racing family. Her father owns Billy Boar Exhaust and her brothers are professional racers. Recently, her brother, Chad raced at Chili Bowl Nationals.

Going through their Instagram, it seems the love birds are greatly enjoying their time with each other. They both share photos of them appearing in events together and enjoying holidays.

The 2021 Daytona 500 Pole Winner started racing very early when he used to race with others around his hometown. In 2000, he drove quarter midget cars in United States Auto Club (USAC) competition at just 7 years old. The 2012 ARCA Racing Series Rookie of the Year made his first debut in the NASCAR Xfinity series in 2012 where he drove for the Turner Motorsports. Later, in 2015, he drove the full 2015 NASCAR Sprint Cup Series season.

In 2017, he became the official driver of Hendrick Motorsports and has been racing to the date.

The 2008 USAC Speed2 National Midget Champion is pretty much active in social media and he mostly uses Instagram and Twitter.

His username on Twitter is @Alex_Bowman and has followers of more than 145,000.

Similarly, on Instagram, he goes by the username alex_bowman and has more than 145,000 followers. There he mostly shares photos and updates about his racing events to his followers.

Find more about him at alexbowmanracing.com