Aleshia Ocasio is a Retired American National Pro Fastpitch who used to be a Pitcher for the Chicago Bandits. She played professionally for two seasons with the Chicago Bandits. She attended Harmony High School and for her collegiate year, she enrolled at the University of Florida. After finishing college, she was selected 10th overall in the 2018 NPF Draft by the Chicago Bandits. She made her debut with the bandits on 16 June 2018. She has won a Gold Medal on world-ranked Puerto Rico National Team at the Central American and Caribean Games Barranquilla in 2018. Crystl Irene is a two-times Olympic gold medalist.

The 5' 9'' tall Ocasio was born on 15 August 1996 under the star sign Leo. She was born in Long Island, N.Y. Her family moved to Florida when she was seven. Currently, She resides in Saint Cloud, Florida. Growing up, her role model was Natasha Watley.

The Pitcher for the Chicago Bandits has played professionally for two seasons only. According to a report from Careertrend, the National Pro Fastpitch players make approximately $5000-$6000 per 48 game season. Although some professionals make $20000 per season. Natasha Watley is one of the successful retired softball players who has an estimated net worth of $2 million.

Although she hasn't played much for the team, she might have earned around $25000-$30000 from her professional career. Her estimated net worth is $25000 from her career and other deals.

Aleshia Ocasio wife: who is she engaged to?

The 23 years old is engaged to the WNBA All-star Natasha Cloud. Natasha proposed to Aleshia in Martin County Florida which was released in Instagram stories on Cloud's account.

The couple started dating in 2018 and have been dating since without any affairs or controversies. There isn't much information available regarding them since they like to keep their lives private.

The National Pro Fastpitch is an Official Development Partner of Major League Baseball since 2004 which provides the elite female athletes with an opportunity to pursue a professional career in fastpitch. 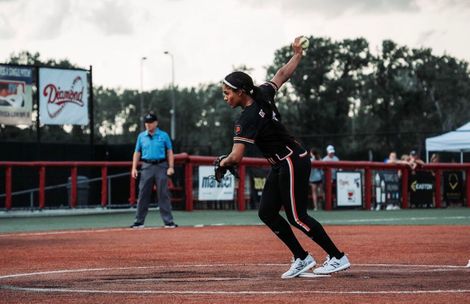 The NPF consists of five teams whose players come to play the sport from various countries such as the United States, Canada, Australia, and Mexico.

In 2018, her rookie season, she posted an incredible 17 strikeouts in 22 innings pitched with an ERA of 1.27. Her next season was no joke either, she threw39.1 innings and posted 29 strikeouts with an ERA of 0.89. Sadly after playing for two seasons, she retired from the NPF League. According to the AGM Jourdan Skirha of the Bandits,

“We want to thank Aleshia for everything she’s brought to our team these last two years, We will miss her energy in the room and wish her the best of luck in her future.”