Aleksandr Sobolev is a rising Russin professional football player. He is currently playing in the Russian Football League for FC Spartak Moscow. Sobolev has been playing in professional matches since 2016. Aleksandr plays as a striker for his club and country. He has represented the Russian international team in numerous events.

Aleksandr Sobolev was born Aleksandr Sergeyevich Sobolev on March 7, 1997, in Barnaul, Russia. He did not come from a reputed family and has not shared much about his early days and parents in public. Aleksandr stands six feet and three inches tall and weighs 80 kg.

Aleksandr started training football with his hometown club, Dyano Barnaul, in 2002. He played for the youth academy of Barnaul for fourteen years. Sobolev represented the club in numerous divisions in his time with the club. However, After training with the team for a long time, The player signed a major contract with Tom Tomsk in the Russian Premier League. Sobolev made his debut for the team in December 2016. In his second season with the club, The player was the highest goal scorer in the 2017/18 Russian Cup. After spending two seasons with the club and appearing in thirty-nine games, Sobolev moved to Krylia Sovetov Samara. He signed a three years contract with the club. In the 2019 season, Sobolev was loaned to Yenisey Krasnoyarsk for a season and scored three goals while appearing in ten games.

Aleksandr was loaned to Spartak Moscow for the remaining season of 2020, but He signed a full contract with the club in May 2020. In his three-season with the club, He appeared in forty-two games and scored nineteen goals. In August 2021, Sobolev extended his contract with Spartak until 2026.

International Caps and Stats With Russia

Aleksandr earned his national team call in 2018. He represented the Russian U21 team in two games. In 2020, Sobolev was called for the senior team. He was part of the preliminary extended 30-man squad for UEFA Euro 2020. The player has earned eight caps while scoring three goals.

Aleksandr Sobolev has an estimated net worth of more than $2 Million. The player earned most of his net worth through his successful football career. Spartak offered him a four-year contract with a salary of $1.3 Million as per sources. The player has extended his contract until 2026 but has not shared the economic agreement. Sobolev is very early in his career and will be making millions in the future.

Sobolev is an active social media user. Aleksandr is married to his longtime girlfriend, Yelena Soboleva. The love birds walked down their wedding aisle in 2016 in a private wedding ceremony in their hometown. 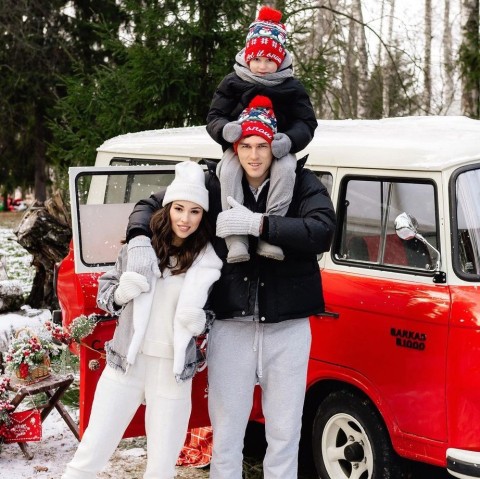 Aleksandr shares a photo with his wife and son SOURCE: [email protected]

They had been dating each other for several years before their marriage. The duo is the proud parents of a son. The family of two extended to three in February 2017.