AJ Griffin is a college basketball player based in America who was selected for the McDonald's All American 2021. The #21 player is currently committed to Duke university along with other top recruits like Paolo Banchero and Trevor Keels.

The Duke committed player is a 5-star rated small forward prospect in the class of 2021 and highly rated like ranked 9 by 247Sports, 13 by Rivals, and  27 by ESPN.

AJ is famous for his speed and agility to break the opponent's defense as well as his liabilities in defense.

Who is AJ Griffin?

Adrian Darnell "AJ" Griffin Jr, famously known by the name AJ Griffin was born on August 25, 2003, in Dallas Texas. He is of African American ethnicity and currently resides in Ossining New York.

AJ utilizes his gigantic height of 6 feet 6 inches to cover multiple positions from attacking to make a short pull-up jump shot to create a defensive shield in the team.

The family of basketball

AJ comes from Griffin's roots with a basketball running in the bloodlines of the family. His father, Adrian Graffin is a former NBA player who played for Houston Chicago Bulls, and Boston. He is currently the assistant coach of the Toronto Raptors. 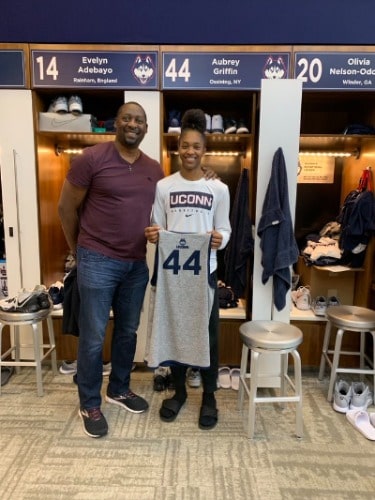 AJ Griffin Jr's mother's name is Audrey Griffin, who is a blogger by profession. They are currently divorced and his mother Audrey accused the former NBA player of domestic violence and.

Likewise, Junior has one brother Alan, who is also a college basketball player. He has 2 sisters, among which, Aubrey is a sophomore at the University of Connecticut.

Adrian Griffin Junior started playing basketball at the early age of 7 under his father's guidance. Before joining Duke, he played basketball at Archbishop Stepinac High School in New York.

He already has shown his ability at the international level and won FIBA Americas U-16 Championship averaging 13.5 pints and 3.3 steals per game.

As of 2021, he has already committed himself to Duke for his university.

What is the Net worth of AJ Griffin?

The net worth of AJ Griffin is Griffin is estimated to be $1 million. However, he has just signed to the Blue Devils as a college player. So there is no rule of paying college student-athletes.

However, being the son of former NBA player, Adrian Griffin, he must be living a luxurious lifestyle. Although he is active in social media but doesn't flex his properties.

But one thing is for sure that he is just 17 years old (2021) and carries a huge talent. If he goes at the same rate, soon he is going to be a star, and of course, there awaits brand offers and good endorsement deals.

Is AJ Griffin in a Relationship? (Girlfriend and Affair)

AJ Griffin is quite secretive about his girlfriend and dating life. Till now, he has never shared photos with any girls, not even a glimpse of his love life. 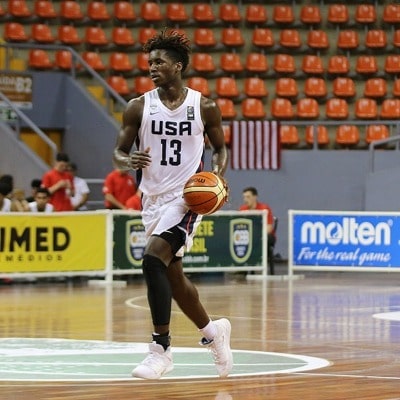 He is too young and a career must be a priority before having romantic relationships. And there is also not a record of him having past relations.

He must be living a single and loving basketball more than anything.

Nonetheless, the young basketball athlete carries huge potential and can be a great basketball star in the near future.