Aidan Hutchinson is a rising American football player who is currently representing the Michigan Wolverines, playing as a defensive end. He finished his high school football career at Divine Child High School.

Plymouth, Michigan native, Aidan Hutchinson was born on 9th August 2000, under the star sign Leo. The twenty-one years old holds an American nationality and is of white ethnic background. He stands 6 ft 6 in (1.98 m) tall and weighs 265 lb (120 kg).

For a collegiate football career, Hutchinson signed to the  University of Michigan.

As a freshman, he played in all 13 games along the defensive line and recorded 15 tackles.

As a sophomore, he played all 13 games along the defensive line; made 68 tackles, 10.5 tackles for loss, 4.5 sacks, six pass breakups, four quarterback hurries, and two forced fumbles.

In his Junior season, he played in three games with three starts along the defensive line before his season was cut short due to injury.

Aidan is majoring in applied exercise science at Michigan's School of Kinesiology.

Aidan Hutchinson is the son of Chris Hutchinson and Melissa. His father is a former college football player who was captain and defensive tackle/outside linebacker for Michigan (1989-92). Hutchinson Sr. won team MVP in the final season and was coached by Greg Mattison in his final season. Further, he ranks 14th on the Michigan career tackles for loss list.

There is no report on media about Aidan Hutchinson's personal life. His girlfriend and relationship are still under the shares. 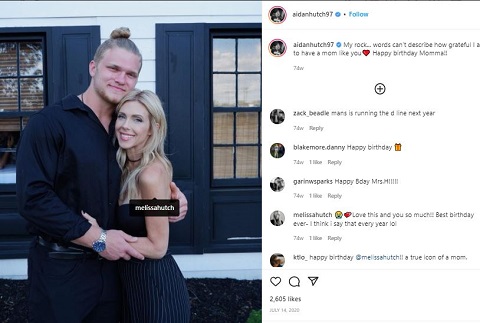 The Michigan Wolverines – No. 97 defensive end is active on Instagram with 76.8k followers but no clue about his love life is found. Rather, he often posts cute pictures with his mother and sister.

How Much Aidan Hutchinson's Net Worth In 2021?

Senior season at Michigan Wolverines, Aidan does not get paid playing for the college team. Ys, NCAA is against paying college athletes for representing the college team. However, with modification of rules, NCAA now allows earning money from endorsements, merchandise, and social media.

But Aidan is yet to reveal his earnings from endorsements.

As of 2021, Aidan Hutchinson's net worth is under review.