Gossip Age 39 American Golfer Jimmy Walker's Net Worth and Lifestyle he Enjoys. More about his House, Cars and Endorsement Deals

Age 39 American Golfer Jimmy Walker's Net Worth and Lifestyle he Enjoys. More about his House, Cars and Endorsement Deals

The 39-year-old golf freak, Jimmy Walker currently battling against Lyme disease, is a 6 times PGA Tour winner. Jimmy, being the source of inspiration for all, has earned a lot of fame and money with his professional career of 17 years.

The American professional golfer is estimated to be enjoying the net worth of $16 million currently. Want to more about Walker's earnings, properties, and his lifestyle? Do scroll down.

Net Worth and Earnings of Jimmy Walker

Jimmy with the record of 6 PGA tour winning and 3 Web.com tour winnings, is playing professionally since 2001. With his golf career journey, Walker is reported to have earned the total career earnings of $24,736,589. 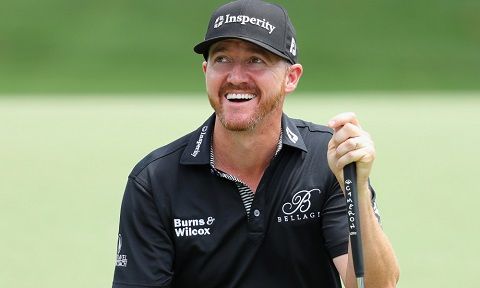 As per sources,  his fellow American golfers Jordan Spieth and Dustin Johnson enjoy the estimated net worth of $80 million and $25 million respectively.

But nothing to blame on Walker as he was diagnosed with Lyme Disease in August 2017.

As reported, Jimmy currently endorses the brands like Proven 4, Vokey Wedge and Lodge Castrion. Back in Walker was sponsored by Burns & Wilcox, a wholesale insurance broker, though, kept the endorsement payment details low.

Jimmy Walker currently lives in his house  in Boerne, Texas with his wife Erin and 2 sons:
Mclain Walker and Beckett Walker. However, Walker has not commented on anything regarding the purchase detail of the house.

Talking about his cars, Walker reportedly owns a BMW and a bus. Okay, now let's take a tour of Jimmy Walker's house along with his family.

Walker, besides being a prominent golfer, is also a lovey father and likes to spend some quality time with his family. Walker's Instagram can be seen full of his joyful moments and lifestyle which he shares with his children.

Thanks @daviderdekphotography for hanging with us and getting some great pics.

Bringing in the year right with good friends. Ice on greens.......go shooting. My little man shot his first rifle and nailed an 8” plate and 450yds. Charlie smashed it too!! Pretty cool. #sendit. @christensenarms 6.5 Creedmoor

Really, all that matter is quality life rather than unhappy lavish life.

The wait for Jimmy's recovery and his incredible play goes on. We wish him best.