Adil Rami's Net Worth and Endorsement

The significant source of Rami’s earning is his club's contract, national team salary, endorsement deal, and sponsorships deals. Adil Rami has an estimated net worth of around $9.90 million as of 2019.

Presently, Adil is signed to FC Marseille, where he receives an annual salary of €6.30 million which is somewhere around $7.3 million. Further, Adil Rami's current market value is $6.32 million dollars/ €5.6 million.

Whereas, back in 2012, his market value was $17.68 million which indicates a decline in his market value. But that doesn't mean that he isn't filthy rich. The soccer star owns a luxurious house in Spain.

Currently 33, Rami is neither married nor single; he is an open relationship with an American icon Pamela Anderson. The lovebird was once spotted kissing in St. Tropez, where the duo shared a cozy dinner at La Gioia restaurant. 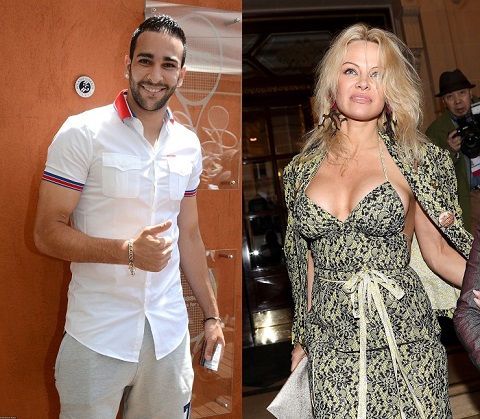 Previously, he was in a relationship with ex-lingerie model Sidonie Biemont. The former couple has twin children together.  Apart, Rami has 2 notches in his eyebrows but no-one knows why.

Adil Rami was born on 27th December 1958 in Bastia, France, to Moroccan parents. His birth sign is Capricorn. Rami is a Frenchman and belongs to white ethnicity.

As a youth, he moved to Frejus, where his mother worked as a member of the city council. He grew up alongside three siblings, two sisters and a brother.

At the age of nine, Rami started playing football with Etoile Frejus Saint-Raphael, as it was his hobby.

After the 2005-06 season, Rami started playing central defense. In the very season, he was offered a trial by FC Lille. He grabbed the opportunity and after a week’s training with Lille, Rami has signed a contract with Frejus receiving a meager $12,378.70.

Remaining 2 months in the 2006-07 Ligue 1 season, Rami was called to the Lille’s senior squad by manager Claude Puel. On 19th May 2007, Rami made his professional debut against Auxerre in a Ligue 1 match, starting at center-back.

On 4th June, he signed a very first professional contract for 2-year, which did last until 2010. He was given the jersey no. 23 and was promoted to the senior team on a permanent basis.

After the 2007-08 season, he signed a 2-year contract extension with Lille. In the following season, Rami earned interest from several clubs including Italian club, Milan; French club, Lyon; and Marseille, and English club Arsenal and Liverpool.

On 30th July 2009, Rami made his UEFA Europa League debut in the first league of the club’s 3rd qualifying round match.

On 3rd January 2011, Rami moved to the Spanish club Valencia, signing a contract for a reported transfer fee of $7.43 million to $12.38 million.

Rami recorded the first goal for Valencia in his debut match against Racing de Santander in a 4-3 home victory.

On 25th September 2013, Rami was temporarily suspended by Valencia from his contract after he interviewed on Radio Valencia in which he openly criticized his coach, Miroslav Dukic, and his teammates. For a reason, he was also fined $340,414.25 for half of the season.

Meanwhile, Rami left Valencia and began training with the Italian club, Milan. On 16th October 2013, Valencia permitted him to train with Milan and later he was loaned.

On 6th January 2014, Rami made his Serie A debut against Atlanta in a 3-0 victory. His first goal for the club came against Torino.

On 12 July 2014, Rami signed a three-year contract with a $5.26 million transfer fee to Valencia with an additional fee of $618,935 by Rami to cover the payment difference with Valencia, as Milan declined to pay the original buy-out clause of $9.28 million.

He recorded the first goal for Milan against Cesena, which resulted in a 1-1 draw on 28th September 2014.

Rami next joined Ligue 1 club Marseille, signing a 4-year contract deal for a transfer fee of $7.43 million. He made his Marseille debut against Oostende in their “2017-18 UEFA Europa League 3rd qualifying round”.

He made his Ligue 1 debut against Dijon in 3-0 win. Rami has made 22 appearances and scored a goal for his native club.

On 11 August 2010, Adil Rami made his international debut in a friendly match against Norway. He played for Moroccan national team and was offered at the competition by manager Henri Michel. Nevertheless, he refused the offer, citing his ambition to play for France.

On 27th May 2012, Rami scored his first international goal against Iceland in a friendly match in Stade du Hainaut, Valenciennes, France. So far, he has earned 33 caps for his national side. He has a good bond with his teammates like Loic Remy, Anthony Martial, Dimitri Payet, and Paul Pogba.