If you love watching American college basketball then, Adia Barnes must not be a new name. Adia is an American basketball coach and a former player. Barnes is currently working as the head coach of the University of Arizona Wildcats women's basketball. She played for twelve years with numerous WNBA franchises.

Adia Barnes was born Adia Ashun Barnes on February 3, 1977, in San Diego, California. S he is among the two children born to Pete Barnes and his former wife, Patricia McRae. After graduating from High School, She earned a scholarship from the University of Arizona.

Adia Barnes has an estimated net worth of more than $5 Million. She has accumulated most of her net worth through her successful career as a basketball player and a head coach. Adia has an annual salary of $400,000. Her contact includes athletic incentives of up to $285,000 each year through 2023-24. 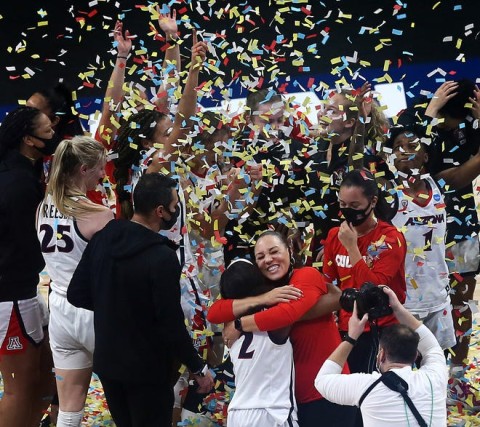 Adia celebrates with her team after winning WNIT SOURCE: The Arizona Public

In 2019, Barnes extended her contract until 2024 and increased her salary from $235,000 to $400,000 per year as part of a reworked contract pending the Arizona Board of Regent's approval. The head coach can also receive $20,000 for winning the Pac-12 regular-season championship.

Adia Barnes is a married woman living a happy married life along with her husband and their children. Adia tied her wedding knot with Salvatore Coppa on July 4, 2012, in a private wedding ceremony. They first met each other in Italy. 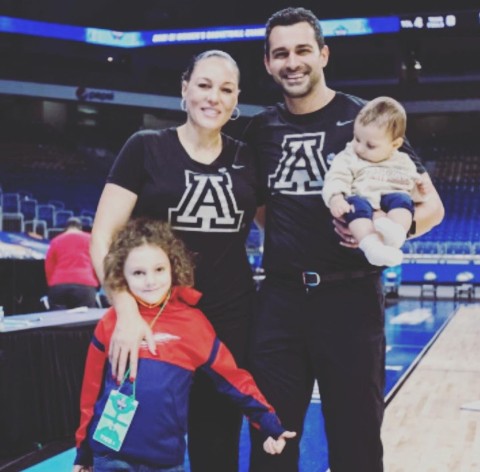 Barnes shares a photo with her husband and children SOURCE: [email protected]

Shortly after the wedding, the duo welcomed their first child, a son, Matteo. Salvatore is very supportive of his wife and keeps attending her games regularly. In late 2020, Adia gave birth to her second child, a daughter, Capri.

After graduating from the University of Arizona, Sacramento Monarchs drafted her in Round 4 in the 1998 WNBA draft. She played with the team for just a season and then moved to Minnesota Lynx. Barnes could not impact her career and moved to more than half a dozen franchises.

In 2004, Adia was part of the WNBA Championship winning team, Seattle Storm. While in her college days, She made it into Pac-10 Player of the Year. Adia even played in European leagues and eventually retiring in 2010.

In 2011, the University of Washington hired her as an assistant coach. After working with the team until 2016, the University of Arizona signed her as their new head coach. Adia struggled with the team in her initial days. She led her team in the WNIT champion final and won the championship title. In the 2020-21 season, Barnes team reached the final at NCAA but lost the final.

Her mother divorced and moved on when she was only three years old. Her mother eventually married another man, Bruce McRae, and Barnes and her birth father drifted apart. Adia's father was an American football linebacker and played in the NFL. Barnes did not know about her biological father until 2017. However, He passed away in 2018 due to Alzheimer's.