Adam Vinatieri is an American former football placekicker who played a total of 24 seasons with the New England Patriots and the Indianapolis Colts. He is the NFL's all-time leading scorer at 2673 points. The South Dakota-born footballer holds the NFL records for most field goals made (599), most postseason points (238), and most overtime field goals made (12). He also has the most Super Bowl wins by a kicker - four.

Vinatieri was born in Yankton, South Dakota on December 28, 1972. He is the only player to score 1000 points for two different clubs. He is the second of four children of Judy M. (Goeken) and Paul Vinatieri. He hails from a long line of Italian, German, and English ancestry. He graduated from Central High School in 1991 and then attended South Dakota State University.  He finished his collegiate career as SDSU's all-time leading scorer with 185 career points.

Adam Vinatieri's Net Worth and Salary

Vinatieri has a net worth of $25 million, reports Celebrity net worth. He ended his NFL career as the second-highest career earner at the kicker position with $51.1 million. The six-foot-tall placekicker finished slightly behind Sebastian Janikowski, who earned $53.2 million during his NFL career. He earned a total salary of $35.1million, made $12.3million in signing bonuses and $2.5million in roster bonuses throughout his 24-year career. His restructured and incentives pay have been documented at around $1.2million.

All in all, his salary, signing bonus, restructured bonus, and incentives landed him a total income of $51.1million. With the New England Patriots, his overall take-home pays grossed beyond $11.4million that included $7.7million base salary, $2.7million agreement gratuity, $314,000 for making it to the roster, $198,529 restructured bonus, and a combined incentive worth $500,000.

Adam shares three children with his wife, Valerie. His partner is a former Miami Dolphins cheerleader. Sources believe it was one of the Patriots' yearly trips to South Beach where Vinatieri had first met his future wife. 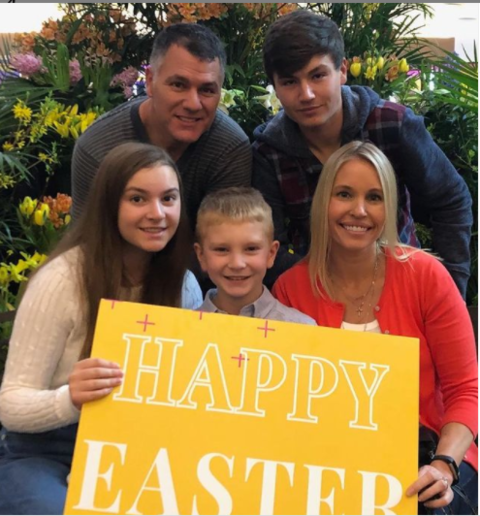 The couple married in 2001. Some say they had their wedding in Bali, Indonesia. His daughter, Allison is a high schooler while Vinatieri's son, AJ plays high school football for Zionsville, Indiana. Valerie is yet to debut on her husband's socials, ergo little to nothing has surfaced that could have otherwise spoken about her life with her husband.

There have been rumors that say she does some work with a charity in Indiana. She, though, once appeared with her family on Easter, 2019. Looking at Vinatieri's Instagram activities, fans are in wonder if he is separated from his wife. However, an earnest saying in that manner is yet to surface in the media.

Vinatieri was signed by the Patriots in 1996 and was later selected by the then-head coach, Bill Parcells as the team's placekicker. For the first 10 years of his NFL career, Vinatieri played for the New England, during which he played in four Superbowls, winning three titles. In Super Bowl XXXVI, he kicked a 48-yard field goal on the final play to give the New England Patriots their first Lombardi trophy against St. Louis Rams.

Two years later, he kicked a 41-yard field goal with four seconds left in Superbowl XXXVIII to give the Patriots their second championship, this time defeating Carolina Panthers by 32-29. After that, he became the first-ever player to be the deciding factor in two Superbowl games. In 2004, he led the NFL in scoring with 141 points (31-for-33 on field goals, and a perfect 48-for-48 on extra-point attempts). Adam Vinatieri was a member of the Indiana Colts for 14 seasons. He has the most Super Bowl wins by a kicker. SOURCE: Indiana Colts

That season, he went on to score a field goal and three extra points in the Patriots win over the Philadelphia Eagles in Superbowl XXXIX. At the conclusion of the 2005 season, Vinatieri had a career field goal percentage of 81.9 percent, the fifth-highest in NFL history. The following, on March 22, 2006, he signed with the Indianapolis Colts, replacing Mike Vanderjagt.

He also beat George Blanda in all-time career games played with 341. The 2018 regular season saw him playing 16 games with field goals made 23-27. While playing his 24th and final season at the NFL, he became the third active oldest player in franchise history and surpassed Gary Anderson for the second-most games played in the NFL account. He finished the year with career lows in field goal and extra point completion per centum at 68% and 78% respectively. Vinatieri retired on May 26, 2021.