Named Time's 100 Most Influential People, Adam Silver is an American lawyer and sports executive. He is the 5th-current commissioner of the National Basketball Association (NBA). Joining the NBA in 1992, he played various roles, such as chief operating officer and deputy commissioner, before becoming the commissioner. Under his belt, the league continued to develop economically and globally, mainly in China.

Rye, New York native Adam Silver was born on April 25, 1962, under the star sign Taurus. Raised in a Jewish family, his mother's name is Melba, while his father, Edward Silver (1921–2004), was a lawyer who served as a senior partner at the law firm Proskauer Rose and specialized in labor law. He finished his high schooling at Rye High School and earned a Bachelor of Arts degree in political science from Duke University. In 1988, he earned J.D. from the University of Chicago Law School.

The American businessman, lawyer, and sports executive Adam Silver currently earns $10 million per annum as salary being the commissioner of the NBA. In June 2018, the NBA extended Adam Silver's contract through the 2023-2024 season.

Adam will have earned exactly $100 million in salary alone from the league by the end of the deal. Moreover, he earns bonuses for achieving various milestones and revenue/expansion goals. As of 2022, Adam Silver's net worth is approximately $35 million.

Adam Silver is a married man. The NBA personality tied the knot with his long-time girlfriend, Maggie Grise, in May of 2015. Since the duo respects each other's privacy, no wedding pictures popped in the social media. 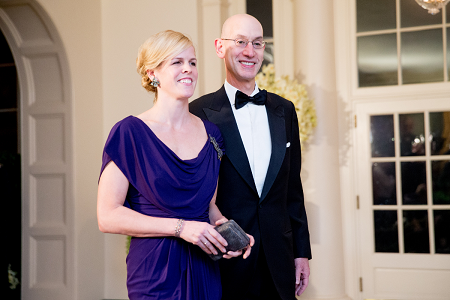 In April 2017, the couple welcomed their first child, a daughter, Louise Burns Silver. On April 6, 2020, he announced that the family expects a new member in approximately six weeks. Maggie is an interior designer based in New York City.

Silver started as the Deputy Commissioner and Chief Operating Officer in the NBA for eight years straight. On October 25, 2012, David Stern, then-current NBA commissioner, endorsed Adam as the new NBA Commissioner when Stern declared that he would resign on February 1, 2014.

In 2014, Silver hit the international headlines for making Donald Sterling sell the Los Angeles Clippers following Sterling's racist remarks. Additionally, he was banned for life from the NBA and charged $2.5 million, the maximum allowed under the NBA constitution.