Adam Rank is a professional fantasy analyst from America who is currently working for National Football League(NFL). He co-hosts the NFL Fantasy Live on the NFL Network on the daily basis. He has been with the NFL since 1995. He also hosts the Good Morning Football Weekend and TNF First Look on the NFL Network.

Besides, the American NFL analyst is also a stand-up Comedian who sometimes appears in Comedy Show. He also hosts the podcast named The Adam Rank Podcast where he answers people's fantasy football questions. And he gives information about the NFL Fantasy through his youtube channel named Adam Rank.

Adam Rank was born on December 10, 1973, in California, United States and his birth sign is Sagittarius. His father's name and mother's name are still not revealed but according to him, his father was a Chicago Bears fan. He said,

"I'm a Chicago Bearsfan because my dad is a Bears fan. But he's no longer with us to root for the team here on Earth. I'm carrying on the tradition. Today's edition is a belated Father's Day gift to him. "

He also has a sister named Whitney Rank who used to work as a production assistant on the Sopranos. 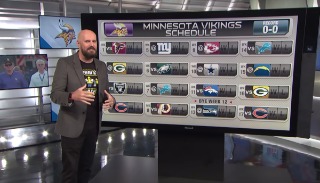 He was very much interested in NFL from his early days. When he was in 6th grade, he participated in NFL writing and secured the third position. Later after graduation, he joined NFL in 1995 and has been working since then.

Read also:- Who is Dick Vitale? (Bio and Early Life)

Net Worth and Earnings of Rank

Adam Rank's net worth is estimated to be $3 million approximately. It includes all his properties, assets, houses, and cars. He earned most of his income from his profession as a host in the NFL. According to Glassdoor, NFL analysts can earn $72,000 per year on average. While the senior analyst and lead analyst of NFL earns $87,000 and $96,000 per year. Being involved with NFL for more than 25 years, Adam Rank must be earning the whopping amount of $96,000 per year with NFL Network.

Read also:- Pat Forde's Contract and Salary; How much is his Net worth?

According to sources, Adam Rank is currently living a happily married life with his wife Jennifer Rank. Adam is a very low-key person who has never shared about when and where the couple tied their knot. And he also does not like to share his private life in public. And he has never shared his family's photos on his social media too.

Besides, there are also no sources that can claim whether Adam and his wife have children or not. It is still under the radar.