Adam Nagy is a rising Hungarian professional football player. He is currently playing in the EFL Championship for Bristol City FC. Adam plays as a defensive midfielder for his team. Nagy represents Hungary while playing for the international matches. Adam wears the no.4 jerseys while playing for the club.

Adam Nagy was born on June 17, 1995, in Budapest, Hungary. He is the son of Istvan Nagy and his wife. Adam holds Hungarian nationality and comes from mixed family background. Nagy has successfully kept his personal life away from the public. Adam stands five feet and ten inches tall and weighs 74 kg.

Adam made his debut for made his official debut for Ferencvaros in May 2015. He was loaned for Budafok for a season but returned to the team after playing a game. In 2016, Nagy was part of the Hungarian League Champion team and was listed among the top 10 young talents at the Euro 2016. In 2016, Adam moved to the Italian side of Bologna. At the end of the first season, The Hungarian player was named the player of the season. However, Nagy could not take his form in the following seasons and ended his career with Bologna playing fifty-one games.

In 2019, Adam signed a three-year contract with the option for the fourth year with the English Championship side Bristol City. Since joining the team, He has appeared in fifty-four games and scored three goals. Talking about his national team appearance, Nagy made his international debut in September 2015 in the UEFA Euro 2016 qualifying match. Since his debut with the team, He has appeared in forty-seven international games. Adam is part of the EURO 2020 along with Roland Sallai and Laszlo Kleinheisler.

Yes, You read that right. Adam is the proud father of a son. Adam seems to be married to his longtime girlfriend, Agnes Csorba. Nagy has not shared a word about his relationship status. They could be engaged, married, or could be dating. They have been together for more than three years. 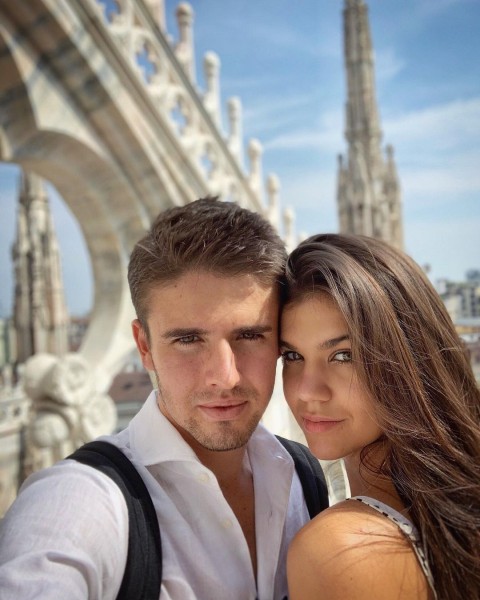 Adam along with his partner, Agnes, at a vacation SOURCE: [email protected] Csorba

In January 2021, Nagy's other half, Agnes, shared about expecting a baby shortly. Adam has not shared much about his love life in public. In June 2021, The duo welcomed their first child, a son Wenceslas.

Adam Nagy has an estimated net worth of more than $2 Million. In 2019, Adam signed a £2.3 million deal with Bristol City. In 2016m Nagy signed with Bologna with an annual base salary of £400,000. Also, The Hungarian player must receive a handsome amount from the Hungary government to represent the nation. He is very much early in his career and shall be earning much more in the future.