Adam Buksa is a Polish professional footballer currently playing for New England Revolution in Major League Soccer as a center forward. Turned full international in 2021, he has been capped 3 times with 4 goals for the Poland national team.

Adam Buksa is currently in a relationship with Aleksandra Zabala, The duo started dating in January 2018. 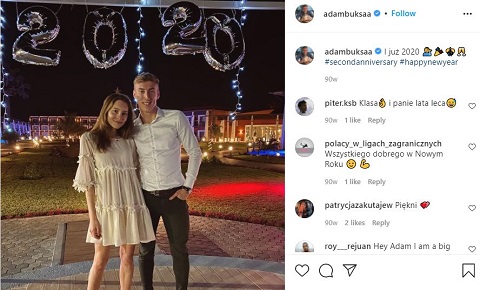 Adam and Aleksandra celebrating the new year 2020 and their 2nd anniversarySOURCE: Instagram @adambuksaa

Both Adam and Alexandra post each other via their respective IG often a time. The duo seems deeply into each other.

A product of the club's youth system of Wisla Krakow, Adam began his professional career in Lechia Gdansk, where he made his professional debut on 25 July 2014 against Bielsko-Biala. For Lechia, he played two seasons, appearing in 16 games with 1 goal.

After that season, he became the permanent player at Pogon where he established himself as one of the most promising young strikers in Poland.

In December 2019, he signed a contract for three years with New England Revolution from Major League Soccer, for a reported transfer fee of $4.5 million, becoming the second-most expensive signing in the franchises' history behind Gustavo Bou.