Abdulrahman Ali Al-Aboud is a native Saudi Arabia football player who plays as a winger in the Saudi Pro League Al-Ittihad FC, headquartered in Jaddah. Sometimes, he is kept in the attacking midfielder and a striker role according to the coach's game plan. Primarily, he plays as a right winger. Due to his versatility to cope in the center as well as in the wing region, he is considered one of the vital and versatile players for his club. For Ittihad, Al-Aboud put on number 24 on his jersey.

Well, he has put on several trophies and cups in his trophy win streak coming thus far. Before playing as a winger for Ittihad FC, the Saudi International Abdulrahman Al-Aboud was present in two other Saudi Pro League clubs such as Al-Ettifaq and Al-Orobah. Reportedly, as of 2022, the winger appeared in just a single match for the Saudi national football team.

Al-Aboud was born with the family name Abdulrahman Ali Al-Aboud. But mostly he is known by the name Abdulrahman Al-Aboud. The player was born on 1 June 1995 in Dammam, Saudi Arabia; the capital city of Eastern city. In the meantime, Al-Aboud is 25 years old and according to the astrologers, his zodiac sign is Gemini. He is of Citizen of Saudi Arabia of Asia ancestry. Likewise, his ancestor also hailed from Saudi Arabia.

Being born in Dammam, Al-Aboud's childhood was spent there only. Not to mention, there is no availability of his parent's and siblings' details as of now. So, their identity and professions remain hidden under the radar. No doubt, his parents are his most persistent backers as they have supported him in every step of his professional and personal life. As his club is located in Jeddah, hence resides there with his family.

Al-Ittihad jersey number 24 Abdulrahman Ali Al-Abouda is a footballer with an average height. He stands tall at a height of 5 ft 8 inches or 1.74m and weighs around 67 kg. Being an athlete, a fit and healthy body is a must. So, Al-Aboud has preserved his body pretty well. Talking about his looks, his skin has a wheatish complexion and a beard on his face.

Professionally, Abdulrahman kicked off his football journey in 2014. However, there are no data on his amateur career now. He began his career signing a major five-year contract with the Saudi Pro League Al-Ettifaq. There, he played from 2014 to 2019. In his sophomore year, he made just appeared for the club's earning total time of 106 minutes. Subsequently, in the second year, the club assured to send him on loan to Al-Orobah for the 2016-17 season. There, the Saudi International recorded six league games with two goals on his name. Shortly after that, he again moved back to his former club in the following season.

Similarly, in the second and third year with AL-Eiifaq FC, he made his appearances in overall 44 games adding three goals to his tally. After that, AL-Aboud decided to join another Sadui club Al-Ittihad 2019 on 4 July 2019 for a fee of €2.4 million. He has played in Saud Pro League, King's Cup and the AFC Championship League for the club. In his debut season at Ittihad, he played in fifteen matches in the Saudi Pro League and just a single match in the AFC Champions League. Likewise, he recorded 23 games in 2020-21 and 26 in the 2021-22 season. For your info, he is also an important part of the 2021-22 league first runner team Ittihad. To date, the Dammam-born winger played 69 matches for Ittihad FC in all formats. 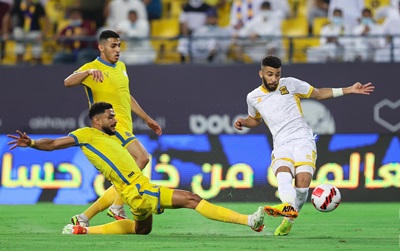 Abdulrahman Al-Aboud made his international debut on 12 Oct 2021 in the world cup qualifying match. Initially, he made it to the Saudi national team list back in 2019 but he was compelled to sit on the bench. And finally, in 2021 he made his presence for his nation just by playing a single match in world cup qualifiers. Moreover, he is also most likely to be a member of the national football in the upcoming FIFA World Cup.

Relationship status: Who is Abdulrahm's girlfriend?

When it comes to his love life or personal matter, he is very confidential about it. Abdulrahman is a man with a private personality who hardly opens up about it. As a result, there is no sign of his love life anywhere. Moreover, he is also less active on social media platforms which makes us more challenging to find out whether he is married, single or mingle. Also, there is no news that he has been previously engaged or dated someone. Thus, his relationship status at present remains suspenseful.

Abdulrahman, 27, the ex-Al-Orobah star, is a versatile football player. His dribbling ability and pace make real barriers for his opponent while facing him. He has been playing professional football since 2014, so he must have generated huge fortunes from his profession. to date. Per the report, Abdulrahman estimated net worth in 2022 is around $5 million, including all his assets. His current trending market value in Trasfermarkt is €1.50 million, and his all-time highest value to date is €2.4 million when he signed with Al-Ittihad Fc from fro Al-Ettifaq.

Now, as an Al-Ittihad winger, Al-Aboud receives £15,000 per week and £7,80,000 per annum. He is in the top 16 players with the highest salary, and Aleksandar Prijovic tops the top spot of highest salary earning players Al-Ittihad with a weekly wage of £105,000 and £5,460,000 yearly. Apart from football, he also acquires income from his national team too. Moreover, various brands, commercial ads and companies also pay him handsomely for his role in advertising or being a brand ambassador for their products.

As I have said earlier, he is quite a reserved person and has barred himself from social media platforms. He is not a media user. He has been restricted from all kinds of social media outlets like Facebook, Instagram and Twitter. He prefers to stay back from the media spotlight.