Megan Bozek is an American Ice hockey player representing the United States national team. Most recently, she played for the  KRS Vanke Rays of the Zhenskaya Hockey League (ZhHL) in the 2020-21 season.

How Much Is Megan Bozek's Net Worth?

Most recently Megan Bozek played for the  KRS Vanke Rays of the Zhenskaya Hockey League (ZhHL), where she earned a five-digit figure per annum.

Before, she played for Buffalo Beauts of NWHL. After signing an extension of a one-year contract for $22,500, Bozek became the highest-paid player in the history of Beauts.

Besides, she is a silver medalist at the 2014 Olympics (Sochi). According to the source, American Olympians who win a gold medal get awarded $37,500. It's $22,400 for a silver medal and $15,000 for a bronze medal in addition to grants and benefits such as health insurance.

Megan Bozek is married to Andrew Ferguson, a rugby player. The couple tied the knot on 27th August 2021, after dating for a very long. 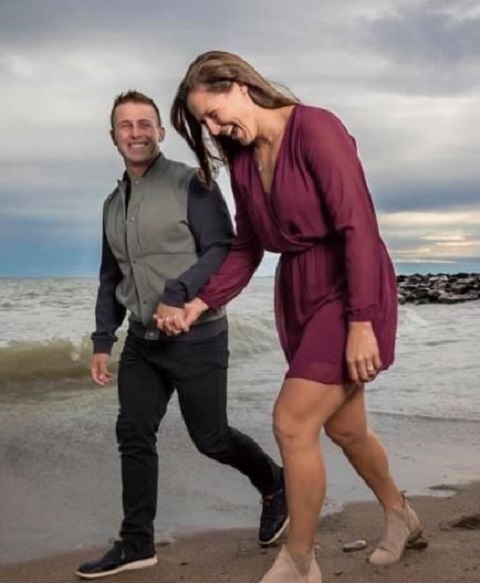 Her finance, Andrew Ferguson was born on 1st May 1992 in Mississauga, Ontario, Canada. Did his high schooling at Lorne Park Secondary School, Ferguson is a graduate of McMasters University.

Currently, he plays as a scrum-half for the Toronto Arrows in Major League Rugby (MLR) as well as Canada national team.

in the 2017-18 season and 2018-19 CWHL seasons, she played with the Markham Thunder. on 25th September 2015, Bozek joined the Buffalo Beauts of the National Women's Hockey League (NWHL). She was named for the inaugural NWHL All-Star Game, Bozek won the hardest shot competition.

On 31st July 2016, Buffalo re-signed Bozek agreeing on a  one-year contract. For the team, she scored a goal at the 2nd NWHL All-Star Game. In a match against the Boston Pride in the Isobel Cup, Bozek scored a goal in a 3-2 victory, kissing the 2017 Isobel Cup Champions.