Aaron Christopher Ramsdale is an English professional footballer signed by the Premier League side Arsenal as a goalkeeper. At the international level, he has represented the England national under-21 team.

Stoke-on-Trent, England native Aaron Ramsdale was born on May 14, 1998, under the star sign. The twenty-three years old holds an English nationality and is of white ethnicity. He stands 6 ft 2 in (1.88 m) tall.

How Much Is Aaron Ramsdale's Net Worth In 2022?

Aaron Ramsdale is engaged to his girlfriend-turned-fiance, Georgina Irwin. The pair have been in a romantic relationship for a long time. Besides, the lovebirds started their romance in 2019. During that time, Ramsdale was still on loan with AFC Wimbledon. 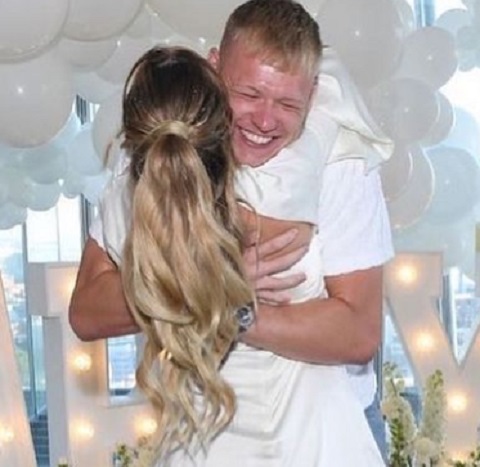 Aaron Ramsdale is engaged to his fiance  SOURCE: Instagram @aaronramsdale

Moreover, they got engaged when Ramsdale kneeled in August 2022. The footballer also posted some snaps of the loving moments on Instagram.

Nick Pope and Jordan Pickford are also goalkeepers from England. He is among the possible players for the English Team in the upcoming 2022 FIFA World Cup.

Ramsdale started footballing with Marsh Town and then for Bolton Wanderers. Upon Sheffield United's youth academy graduation, Ramsdale signed a scholarship with the club in May 2014.

In May 2016, he signed his first professional contract with the club. Ramsdale made his professional debut starting in a 6–0 home victory over Leyton Orient in the FA Cup, keeping a clean sheet in the process. He also made another appearance in the FA Cup against Bolton Wanderers but lost 3–2.

On January 31, 2017, he signed with Premier League club AFC Bournemouth. In the January 2018 transfer window, Ramsdale was loaned out to Chesterfield for the rest of the 2017–18 season. On January 6, 2018, he made his Chesterfield debut against Accrington Stanley but scored an own goal in a 4–0 loss.

On January 4, 2019, Ramsdale moved to AFC Wimbledon on loan until the end of the 2018–19 season. The following day he made his debut for the Dons in a 3–2 FA Cup third-round win against Fleetwood Town at Highbury Stadium.

On the opening day of the 2019–20 season, Ramsdale made his Premier League debut and his full debut for Bournemouth in a 1–1 draw against Sheffield United. On August 19, 2020, Ramsdale resigned from Sheffield United. And on August 20, 2021, Arsenal and Ramsdale agreed on a long-term contract.

Ramsdale has played for England at the Under 18, Under 19, Under 20, and 21 levels. On November 15, 2021, Ramsdale made his debut for the senior team while playing against San Marino.