A.W. Hamilton was born Archibald William Hamilton on October 15, 1980, in Georgetown, Kentucky. He is the son of Deni Hamilton and her husband. William rose to fame only after his successful career so, there is not much information about his early life and parents shared with the media. Hamilton holds American nationality and is of white ethnicity. He graduated from Scott County High School and then enrolled at Wake Forest University.

Georgetown Native Hamilton started his career like several other coaches as a basketball player. He was named 1st team Kentucky All-State in 1999 and Kentucky's 8th Region Co-Player of the Year. Hamilton was inducted into the Scott County Sports Hall-of-Fame in 2015. 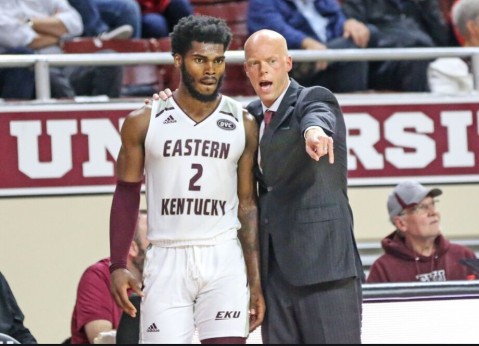 Hamilton instructing his player in a game SOURCE: WTVQ

After graduating from Marshall University in 2005, Hamilton joined the Marshall staff as Graduate Assistant for Coach Ron Jirsa. He worked with the team for just a season and then moved to Hargrave Military Academy as their assistant coach in 2006. In 2011, Hargrave hired him as their new head coach. Archibald remained with the team until 2017. He finished his High School coaching record with 237-22.

In 2018, Eastern Kentucky University hired Archibald as their head coach. Under his leadership, EKU has broken almost a dozen of its records. Last year, he was named Colonels' Choice Award Co-Coach of the Year.

Married Life and Children; Who is his Wife?

Hamilton is married to his longtime girlfriend, Chelsea Hamilton. Both of them have become successful in keeping their personal life away from the media. Unlike other head coaches, He is not active in social media, making a huge difference in gathering information.

William and Chelsea are the proud parents of two daughters, Charleigh and Andi. His wife stood by his side when he was fighting for his life with cancer. In the mid-2020, Hamilton shared about his cancer and his ongoing treatment.

A.W. Hamilton has an estimated net worth of more than $1 Million. The head coach has a base salary of $200,000 with his University. The average salary of a head coach is more than $50,000. He has been working as an assistant coach and head coach for almost two decades and must be earning a good amount.