Howie Long has had an interesting career life with him finding success as a professional NFL player in the past and currently as a studio analyst. His success in his career life pales in comparison to the success he has had in his marriage and relationship.

Long who is married to Diane Addonizio has a long history with his wife. Continue scrolling down to find out all about his relationship with his wife and also find out more about his family and children.

Howie Long's relationship with Diane Addonizio plays out straight like the story of some classic love story movies. The now husband and wife met each other during their college years as both of them attended the same Villanova University.

As soon as Long graduated from university, he joined NFL and began his career as a professional NFL player in 1981. Only a year after turning pro, Long took his relationship with Diane to the next level and married her in June of 1982, the following year.

The couple has spent more than three decades together as husband and wife and is still going strong to this day. Diane has been there with Howie Long through his highs and lows. His wife's support may be the reason that Long has been able to make it this far with the success that he has been able to find.

Long may have been able to buy a comfortable life with his success in NFL and as a sports analyst but it is the love and support of his wife and children that has brought happiness in his life.

Just as Howie Long graced his presence in the NFL during his prime years, he has also become a father to children who have continued the tradition. Long and Diane are the parents to three children all of whom are sons.

Their first son Christoper Howard Long was born on March 28, 1985. He was the first of their children to follow in the footsteps of their father and currently plays as the defensive end for the Philadelphia Eagles of the NFL. 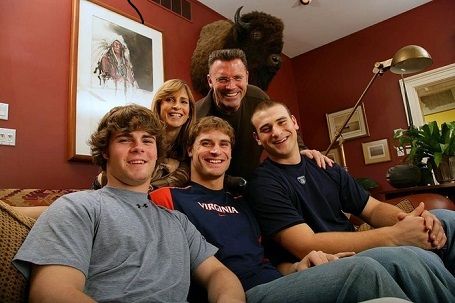 Kyle Howard Long is the second of the Long children who was born on December 5, 1988. Just like his brother and father, he also decided to pursue a career in football and currently plays as a guard for the Chicago Bears.

Long's youngest son Howard Long Jr. was born in 1990 and unlike his brothers has worked as a scouting assistant and personal assistant for the Raiders. Howie Long has been successful in giving his sons a proper upbringing where they are now able to make a name for themselves. He has been blessed with a good wife and children.