Zohib Islam Amiri, famously known as Haroon Amiri, is a professional soccer player from Afghanistan currently playing for the I-League club Real Kashmir FC and the Afghanistan national team. He is one of the most famous athletes in his country.

Haroon Amiri, the Afghani midfielder, was born on 15 February 1990 to the ethnic Hazara family in Kabul, Afghanistan. Amiri has been playing football professionally since the age of 15. As of 2022, he is thirty years old and stands tall at 5 ft 10 inches.

Amiri, an Afghan of Hazara descent whose parents hail from the province of Bamyan, grew up playing in the streets of Char Qala. He initially started playing professionally at the age of 15 years in 2005. He kicked off his football career playing for Shoa FC in 2005, and later in 2007, he went to play for Kabul bank FC.

Despite the challenges he faced in his country, he somehow pursued his dreams. The Real Kashmir's defensive midfielder Amiri signed a four-year contract with Mumbai FC in2011 and was a star player. He even won the fan player award of the season. After expiring his contract in January 2017, he signed for Dempo SC for a year and made his debut game in the match against Rangdajied United. 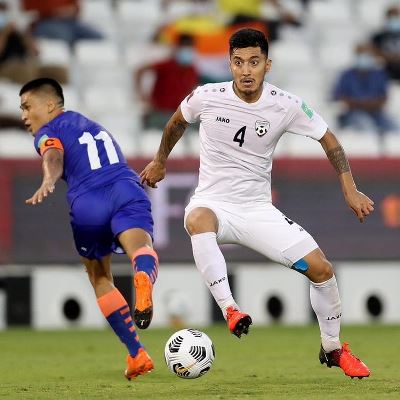 In the early 2014 season, he signed for DSK Shivajians. Likewise, he then decided to join Chennai Fc in Jan 2017 in Hero I-League. But after disputes with the coach, he left the club and joined Canadaian PLSQ side Blainville in 2019.

Playing a season in the Canadian league, the Afghanistan international Amiri moved back to I-league for the 2019-20 season with Gokulam Kerala, where he played 12 games. Finally, in 2021. Ahead of the 2020-21 season, Amiri joined Real Kashmir, where he also appeared with Kashmir in the 2021 IFA Sheild. To date, he has just played 11 games for Kashmiri United.

Former Mumbai Fc midfielder Amiri is a private personality person. He prefers to stay away from the limelight. He hasn't dated and been engaged to anyone before, as per the sources. The Afghani defensive, the midfielder has kept his life low-ket due to which his love life and affairs details are still a mystery.

Amiri has not been seen with anyone anywhere presently; he is believed to be single.

What's Amiri's agreed annual salary with the club? Net worth and market value

The Afghan national Hazara descent soccer player Amiri is a well-established athlete and is a role model for many people. His primary source of income is from playing for the top club. According to our reports, Amiri's net worth is around $2 Million. When he joined Real Kashmir, his agreed salary was $3000 per month, $36000 per year. Besides football, Harron makes money from sponsors, buildup and ad collaborations. However, he hasn't promulgated the amount he received from the partnership and other sources. As per Trasnfermarkt, the current worth of Afghani defensive midfielders is €200k.

We can find him on various social media accounts. Amiri's Instagram account goes by the name @zohibislamamiri_3 and has more than 77K, and his Facebook id is @Zohib Islam Amiri. Via these social media IDs, Amiri shares his life and football news with his fans and followers.