Zlatko Dalic is a Croatian professional footballer turned manager who stands as the manager of the Croatia national team. Previously, he managed the team such as Al Ain, Al-Hilal, Al-Hilal B, Al-Faisaly, Slaven Belupo, Dinamo Tirana, Rijeka, and Varteks.

Livno, SR Bosnia and Herzegovina, Yugoslavia native, Zlatko Dalic was born on 26th October 1966, under the star sign Scorpio. He is the son of Kate and Ivan Dalic. The fifty-four years old stands 1.79 m (5 ft 10 in) tall. He holds Croatian nationality.

It's been almost four decades that Zlatko Dalic into the football world: first two decades as a football player and then manager. He has earned a tremendous sum of money through his successful career.

Zlatko Dalic was placed 23rd with an earning of €550,000 in the list of Annual wages of national team coaches in the 2018 World Cup. Germany Coach Joachim Low hit first place in the list with an annual wage of 3,850,000 euros.

Zlatko Dalic's Wife: Is He Married?

Zlatko Dalic is married to his high school sweetheart, Davorka Dalic, an economist and a graduate of the University in Split, Zlatko. The couple tied the knot in 1992. 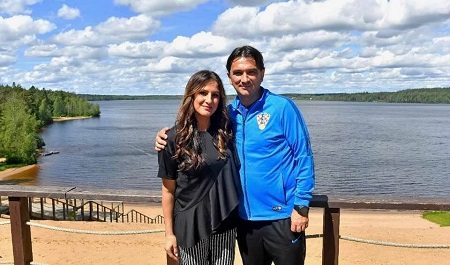 The couple shares two children. Their firstborn, Toni (1993) is an IT Engineer and a DJ at Papaya Club who previously worked for Microsoft and Acer. Their other son, Bruno was born in 1998, studied at University in Zagreb.

A youth product of Troglav 1918, Zlatko Dalic joined  Hajduk Split in 1983 and thus starting his senior career, where he stayed until 1986. Then he played for  Cibalia, which was at that time known as Dinamo Vinkovci. Further, he played for Buducnost Titograd, Velez Mostar, and Varteks. He concluded his playing career in 2000 at Varteks.

In the summer of 2007, he became manager of Rijeka and finished fourth at the end of the 2007–08 season. In the 2008–09 season, he went on to manage Albanian champions Dinamo Tirana, with whom he won the Albanian Supercup.

In 2009, Dalic returned to Croatia and joined Croatian football club, Slaven Belupo. In the 2010–11 season, he was named the head coach of Al-Faisaly.

On 3 May 2012, Dalic moved to Saudi Arabian club Al-Hilal to manage their B team. On 8 March 2014, he was appointed manager of Al-Ain in the United Arab Emirates after the team had fired Quique Sanchez Flores.

On 7 October 2017, Deric was named the head coach of the Croatia national football team.