Artemi Sergeyevich Panarin a.k.a. Artemi Panarin is a Russian professional ice hockey winger currently signed to the Columbus Blue Jackets of the National Hockey League (NHL). Previously, he played for the Chicago Blackhawks, with whom he began his NHL career.

The twenty-seven years old is neither married nor single, currently, he is dating Alisa Znarok. Furthermore, his net worth is $7 million.

Artemi Panarin has an estimated net worth of $7 million as of 2019, mostly earned through his hockey career.

Furthermore, the hunk has summoned around $13.5 million through his entire NHL career.

As per riding, he has Jeep Grand Cherokee worth $65,000. While currently, he might be concentrated on his career, he can choose from a wide collection of cars next time.

Panarin is currently dating Alisa Znarok, a model. Znarok is a daughter of Soviet-Latvian-German professional ice hockey player and coach.

The two is in a relationship for a long time. They often share their adorable pictures via their official socials and living a blissful life. 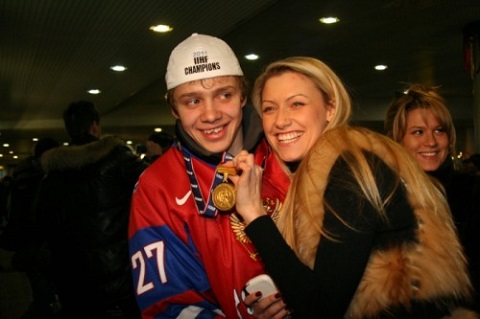 Previously, he was in a relationship with a lady named Alexandra. However, there is not much information about his ex-girlfriend except her name.

Artemi Panarin was born on 30 October 1991, in Korkino, Russian SFSR, URS. His nationality is Russian and ethnicity is white. He was raised in Korkino by his parents.

During his early age, he was interested in ice skating. However, his maternal grandfather, a former amateur hockey player, encouraged him to play hockey when Panarin was five years old. His grandfather helped train him and would often drive him to hockey tournaments in Tyumen.

Panarin enrolled at the Traktor Ice Hockey school in Chelyabinsk, where he trained six days a week for six months a year.

On 29 April 2015, Panarin inked a two-year entry-level contract with the Chicago Blackhawks. On 7 October 2015, he scored his first career NHL goal against Henrik Lundqvist of the New York Rangers.

Here are his NBA career Stats: