Zach Robert Plesac a.k.a Zach Plesac is an American professional baseball pitcher who is signed to the Cleveland Indians of Major League Baseball (MLB). He made his MLB debut on 28th May 2019.

Crown Point, Indiana native, Zach Plesac was born on 21st January 1995, under the star sign Aquarius. He is the son of Ron Plesac and Jeannie Plesac. He is the cousin of Dan Plesac of MLB (1986-2003) and another uncle, Joe Plesan played in the minor league (1982-1987). Further, the twenty-six years holds an American nationality and is of white ethnic background. He stands 1.91 m and weighs 100 kg.

There is no information available in the media/public about Plesac's love life. He has just zipped his mouth when it comes to his personal life. For now, the hunk is possibly single. 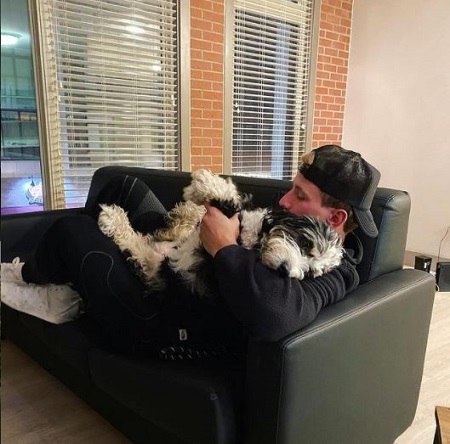 However, love life is always not about dating or girlfriend. Zach Plesac is a Cynophilist whose Instagram is full with his four-leg best friend. Most of the time, he hangs out with his furry friend and takes him out with him every place possible.

Zach Plesac enrolled at Crown Point High School where he starred in football, basketball, and baseball. However, h ultimately chose baseball and played for the Ball State Cardinals of Ball State University.

Since 2017, his professional baseball journey began playing with the Class A Short Season Mahoning Valley Scrappers. Following his posting a 1.38 ERA in eight games, he was promoted to the Class A Lake County Captains where he finished the season, posting a 1–1 record with a 3.60 ERA in six starts.

In the 2018 season, he played for the Class A-Advanced Lynchburg Hillcats as well as the Double-A Akron RubberDucks. For the 2019 season, he returned to Akron and further promoted to the Triple-A Columbus Clippers in early May.

In late May, Plesac made his MLB debut that day at Fenway Park against the Boston Red Sox. He concluded the season with an 8–6 record in 21 starts. He struck out 88 in 115+2⁄3 innings.