Zach Collaros is a well-known professional American football player. He has been playing in the Canadian football league for the Winnipeg Blue Bombers since 2019. Callaros plays as a quarterback for his club. Zach was undrafted in the 2012 NFL draft and played with Toronto Argonauts.

Zach Collaros was born Zachary J. Callaros on August 27, 1988, in Steubenville, Ohio. He is the son of Dean Collaros and his wife. Much about his parents and their occupation is under the radar. Zach graduated from Steubenville High School and enrolled at the University of Cincinnati. Talking about his physical appearance, Collaros stands six feet tall and weighs 90 kg.

Zach Collaros's Net Worth in Millions

Zach Collaros has an estimated net worth of more than $3 Million. The player has earned most of his net worth through his successful American football career. Zach has been playing at the professional level for more than ten years. Cody Fajardo is the highest-paid player for the 2022 season in the Canadian Football league,, with an annual salary of $515,000. 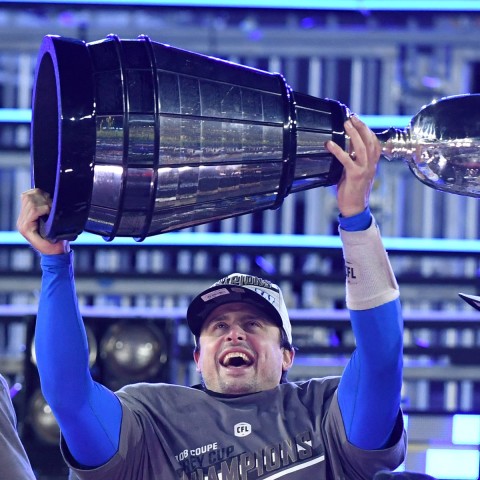 Zach shares a photo with his CFL title SOURCE: CNN

Zach will be making millions in the future. He is among the highset-paid player in the league.

Zach is an active social media user. He is pretty open about his relationship status. Zach exchanged his wedding vows with Nicole Collaros. The love birds had a private wedding ceremony in their hometown where they had invited only a few members from both the families and close friends.

Zach shares a photo with his wife and daughter SOURCE: [email protected]

Zach and Nicole have not shared about their first meeting experience. The duo is the proud parent of two child. One of their daughter was born in 2020. Zach is somehow private about his children and has kept them away from the spotlight.

Zach started playing American football from High School. He was named to High School football team and led the  the Big Red to Division III state titles in the 2005 & 2006 seasons. After graduating from High School Collaros enrolled at University of Cincinnati. The player was selected as the 2010 First-Team All-Big East quarterback.

Zach listed his name for the 2012 NFL draft but was undrafted. Shortly after that, Tampa Bay singed him but the contract was terminated shortly. He moved to Canada and joined Toronto Argonauts. The following season, Zach moved to Hamilton Toger-Cats. The player has had ups and downs and moved to several clubs. In 2019, He was part of Toronto Argonauts that won the Grey Cup. After the season, Zach moved to The Bombers and in 2021, He won the CFL Most Outstanding Player and Grey Cup MVP award.