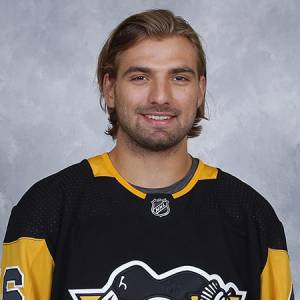 Zach Aston-Reese is an American professional ice hockey player who plays in the National Hockey League (NHL). As of 2019, Zachary Aston-Reese currently plays for the Pittsburgh Penguins as their Forward.

Aston-Reese reportedly earns around $925,000 as his yearly salary from Pittsburgh Penguins. Further, Zachary Aston-Reese has an estimated net worth of over $1 million.

As per his nationality, he is American and belongs to the White ethnic group and has a star sign, Leo.

Further details regarding his parents are not available. Zach grew up along with his sister and a brother William Jr. During his early days, he played hockey for the Northeastern University.

Zach Aston-Reese Salary and Net Worth

As of 2019, Zachary Aston-Reese has an estimated net worth of over $1 million and Matthew Pecca also has the same net worth. He reportedly signed a two-year contract worth $1,850,000 contract with Pittsburgh Penguins.

Let's have a look at Zach's total career earnings until 2019:

The details regarding the current relationship status of Zach Aston-Reese is not confirmed but in one of the website, it is mentioned that Zach has a girlfriend.

So far he hasn't posted anything about his probable girlfriend/wife on his official social accounts since he keeps his personal life away from the general public.

Further, there are no rumors claiming that Zach is a married man. He might be planning to get married to his girlfriend soon.

Zach is a career-focused man and stays away from controversies since he is at the beginning of his career.

In addition to his playing career, he is also a famous social media star with a large number of fan followers on his official social accounts.

He has a charming personality with brown hair and blue eyes along with a height of 6 feet and weighs around 93 kilograms.

Zach started his playing career at the age of 15 with the New Jersey Rockets and later played with Lincoln Stars of the United States Hockey League.

Being undrafted in the NHL draft, on March 14, 2017, he was signed by the Pittsburgh Penguins and made his NHL debut against New Jersey Devils and recorded his first NHL goals against Ottawa.

During his game against Washington,  he was checked by Tom Wilson because of this, Wilson was suspended for three games. Zach is playing under Sidney Crosby who is the captain of Penguins.