Carey Price is a Canadian professional Ice-hockey player who plays in the National Hockey League (NHL). As of 2019, Carey Price currently plays for the Montreal Canadiens as their Goaltender. Further, he is considered one of the best goaltenders in the world.

Price reportedly earns around $10,500,000 as his yearly salary from Montreal Canadiens. Further, Carey Price has an estimated net worth of over $13 million. As per his relationship status, he is happily married to his wife, Angela Price and has 2 children with her.

Carey Price Net Worth and Salary

As of 2019, Carey Price has an estimated net worth of over $13 million. Further, the NHL player has an average salary of $10,500,000 annually while Shea Weber earns an annual salary of $7,857,143, standing just behind the Price in the list of highest earners of the team.

On July 2017, it was announced that Price signed an eight-year contract extension with Montreal Canadiens with an annual cap hit of $10.5 million, earning $84 million from the entire contract. This made Price the highest paid goaltender in the 2018-2019 NHL season, surpassing Henrik Lundqvist.

As per his relationship status, he is a married man and currently in a marital relationship with his wife, Angela Price. Further, the couple is the parents of 2 daughters.

Angela gave birth to their first daughter in 2016 and their second daughter was born on December 2018.

One of the most significant times in my life were the first days I spent with my daughter, Liv. I will never forget that time in our lives. That is why this #fathersday i have teamed up with @dovemencare to champion paternity leave for men around the world. #dearfuturedads #ad

Talking about how they started their relationship, Price met his wife Angela while playing with the Tri-City Americans.

In an interview, Angela said that her friend, who dated Carey's roommate at the time, had set up the couple on a blind date. They married in Benton City, Washington, near Angela's hometown of Kennewick, on August 24, 2013. 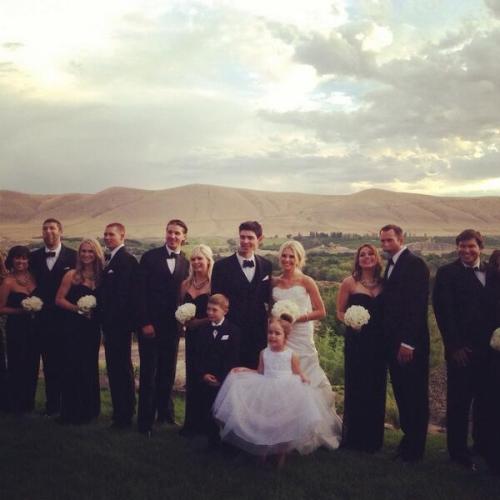 CAPTION: Carey Price and Angela along with their friends and family in their wedding  SOURCE: Tumblr

Since then the couple has been living a happy life with no rumors of divorce or separation. Talking about his body measurement, the Famous NHL star is 6 ft 3 in (191 cm) in height and weighs around 215 lb (98 kg; 15 st 5 lb).

Carey Price was born on August 16, 1987, in Anaheim Lake, British Columbia, Canada to parents Jerry Price and Lynda Price. As per his nationality, he is Canadian and belongs to the White ethnic group. Further, his star sign is Leo.

In the 2005 NHL Entry Draft, Price was drawn up fifth overall by the Montreal Canadiens after his second season with the Tri-City Americans. Price made his highly anticipated debut against the Pittsburgh Penguins on October 10, 2007, and recorded 26 saves in a 3-2 win.

In 2015, he won the trophies Ted Lindsay, Jennings, Vezina and Hart and became the first goaltender in the history of the NHL to win all four individual awards in the same season.

Further, he is currently playing under the guidance of head coach Claude Julien and playing along with his star team-mates such as Tomas Tatar, Max Domi and many more.