Yuli Gurriel is a well-known professional baseball from Cuba. He is best known for playing the first base position for the Houston Astros of the Major League Baseball (MLB). He is also popular to lead the Huston Astros to the franchise's first-ever World Series win. He has also played for numerous MLB teams including Sancti Spíritus and Yokohama DeNA BayStars.

The thirty-five-year-old is married and shares a baby girl with his wife. Further, he has an estimated net worth of $15 million and earns $10 million per annum as his salary from his team.

How Much Is Yuli Gurriel's Net Worth In 2021? Know His Salary and Contract

As of 2021, Yuli Gurriel has an estimated net worth over $15 million. The talented and popular baseball player, Yuli earns a good sum of money from his professional baseball career.

Back in 2018, he earned $12 million and is one of the highest-paid players in the team after Justin Verlander, Brian McCann, and Josh Reddick.

Besides that, he is fond of luxury cars and also owns several well-expensive cars like Ferrari bought for thousands of dollars.

He is rumored to be married as his Instagram post indicates that he is married to his wife as he often posts pictures of himself with a child captioning "baby and papa".

Till date, He has not disclosed the name of his wife but some sources claimed that its Lianet Barrera. The sources have not revealed if the couple is married. 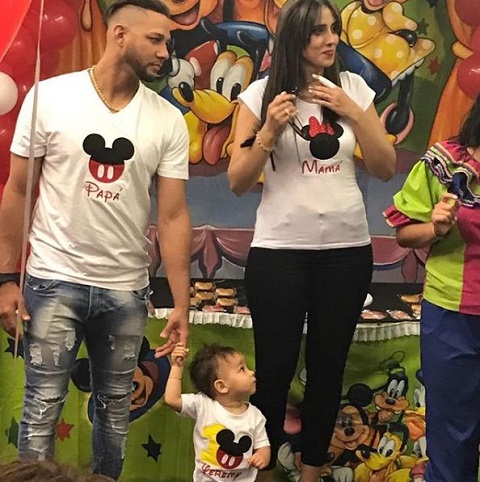 Yuli and his wife and son SOURCE: Wikinetworth

He started his own clothing line named gurriel miami store.

Yuli Gurriel was born on June 9, 1984, in Sancti Spiritus, as the son of Lourdes Gourriel and Olga Lidia Castillo Fernandez. Yuli is a Cuban by nationality and belongs to the mixed ethnicity of African-American.

He was brought up by his parents alongside his two brothers Lourdes Gurriel Jr. and Yuniesky Gourriel. His younger brother, Lourdes is also a professional baseball player who plays for the Toronto Blue Jays.

He began his playing career during the 2004-2005 Cuban National series. A year later, during his baseball debut, he truly dominated leading the series in RBIs, runs, and triples. During the time, he averaged .327 batting and a slugging percentage of .676.

Later in 2014, he signed a year contract with Yokohama Dena Baystars. He played with the Baystars for almost two years. After that, he signed a five-year contract with the Huston Astros for of $47.5 million. Since then, he is playing for the Astros. Recently, he led the team to the World Series Champion and also became AL-Rookie of the Month.