“There is no love on earth greater than that of a father for his son.” With that quotes today we are talking about the power father and son duo in the sport. Who does not know Apolo Ohno, but who raised this veteran short-track speed skating? From winning gold at the Olympics to inducting into the U.S. Olympic Hall of Fame, there is only one person behind Apolo Ohno and that is his father, Yuki Ohno.

Scroll Down!! Read this article and get to know about Apolo Ohno's father Yuki Ohno.

Born and raised in Tokyo, Japan, Yuki Ohno left the country in the early 1970s, at the age of 18. A hairdresser by the professor, he traveled the world before finally settling in Seattle, Wahington in 1980.

Since there is no exact date of his birth, Ohno is assumed to be in his mid-fifties. He holds an American nationality and is of a South Asian ethnic background.

After Yuki settled in the United States, he met an American lady, Jerrie Lee. The duo fell in love and eventually tied the knot. The couple welcomed their first and only child, Apolo Yuki in 1982. However, the couple divorced, Yuki, winning the custody of his son.

Often worked 12-hour shifts, Yuki never thought of extending family in the United States. He chose to name his son Apolo after the Greek words apo, which means to "steer away from" and lo, which means "lookout; here he comes." 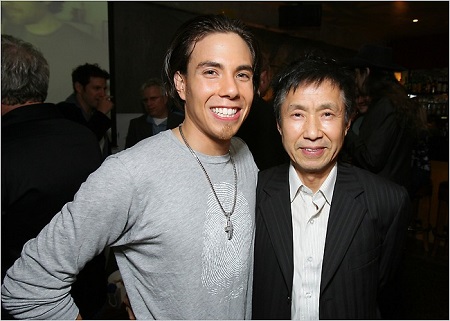 Yuki Ohno and his son, Apolo Ohno SOURCE: The Olympians

Though Yuki's wife is no longer with him, he has the love of his life, Apolo Yuki. Being a single parent, Yuki struggled to raise his son, but despite his best efforts by the time Apolo reached his early teens, he was already getting into serious trouble.

At the same time, Apolo was interested in sports and was an accomplished swimmer and inline skater. Yuki did everything possible to encourage his son to choose sports over crime, so when Apolo saw short-track speed skating on television at the 1994 Lillehammer Olympics and wanted to try it, Yuki drove him to competitions all across the country.

In December 1999, Apolo won a World Cup event title, becoming the youngest skater to win as well as named the first American to win a World Cup overall title in 2001, which he won two more times in 2003 and 2005. He is an eight-time medalist (two gold, two silver, four bronze) in the Winter Olympics. In 2019, he was inducted into the U.S. Olympic Hall of Fame 2019.