Yuka Saso is a rising Filipino professionl golf player. After winning the women's individual and women's team event in Asian Games golf competitions, she rose to fame. Saso played in the LPGA Tour and turned professional in 2019. Yuka has won three major titles, including one LPGA Tour and two LPGA of Japan Tour.

Yuka Saso was born on June 20, 2001, in San IIdefonso, Bulacan. She is the daughter of Fritzie Saso and her husband, Masakazu Sazo. Her father is of Japanese descent, and her mother is from the Philippines. Talking about her physical appearance, Saso stands five feet and five inches tall and weighs 60 kg.

Career Earnings, Net Worth and Sponsors

Yuka Saso has an estimated net worth of more than $1 Million. She has earned most of her net worth through her successful career as a golf player. Saso must be making a handsome amount through her sponsorship deals with International Container Terminal Services Inc. 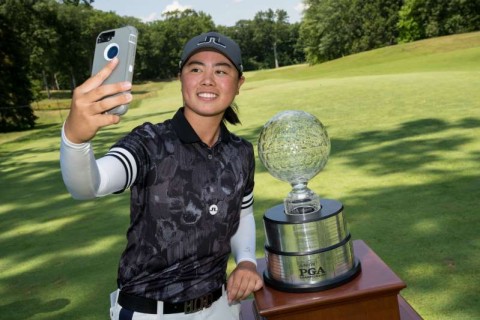 Yuka has earned a significant amount from her career in the Japanese LPGA tour. While playing in five events, she has made more than $20,000 as her prize money. Saso has earned $1,474,010 in the ongoing season of 2021 LPGA events. The player has earned the most from U.S Women's Open in 2021. She took home the prize money of $1 Million from the event.

Saso is very much early in her career and will be making millions in the future. A golf player does not need to win a series to earn their prize money, and they are paid based on their score at the end of the event.

Who is Yuka Saso Dating? Know About Her Boyfriend and Relationship Status

Yuka is very much private about her love life in public. Although She is an active social media user, Her timeline is filled with photos of her training, games and family. Saso is believed to be single as of 2021. The player is very much focused on her career and must be trying to make a better future. Saso could secretly be dating someone and waiting for the right time to open about her relationship.

Yuka started playing golf at the age of eight. She won numerous titles before turning professional in 2019. Saso won the 2014 Sabah International Junior Masters as her first major amateur title. In 2018, She won the gold medal at the Asian games and stunned everyone with the victory. Saso also played in the mixed team event, pairing with the male golfer and compatriot Carl Jano Corpus.

Yuka turned professional in November 2019 at the LPGA of Japan Tour.  She made her debut at the Earth Mondahmin Cup in Chiba. The player won her first professional title at the 2020 NEC Karuizawa 72. In 2021, Sosa made her LPGA debut and won her first title in the U.S Women's Open, becoming the youngest golfer to win the tournament leaving behind Inbee Park and Nasa Hataoka.