The French-born Ivorian forward, Yohan was born on 17 November 1993.  He is the son of former Ivorian player Roger Boli. Most of his family members including his nephew, cousin is also professional football players. As per astrology, his zodiac sign is Capricorn and he is  28 years old as of 2022.

Yohan Boli has a shredded and athletic body type. He possesses a good height of  1.81m(5 ft 11 in) and weighs around 76kg. He is from black ethnic background having a dark skin complexion and short curly hair.

The former Ivorian player Roger Boli has a huge influence on his son Yohan Boli. He followed in his father's footsteps and now he is doing well in his football career. In Yohan's football career, he has played for seven clubs in different countries and also represent Ivory Coast internationally as well.

The Ivorian forward started his club career in 2010, when he signed a year contract with Avion FC in appearing in a single match in the whole 2010-2011 season in Championnat de France Amateur. After completing his contract there, he joined Championnat National 3 side Sedan II  in 2012 where he appeared in 24 games in total.

After his youth career, he finally get to play in the Belgian Second Division for Roeselare FC for the 2013-14 season where he played 21 games. Boli couldn't perform well as expected by the club so he was ground to Belgian Third Divison side Vervioetois where he struggles real hard. During his time at Vervioetiis, he was really focused and very conscious about his game. He really improved his gameplay, skills, and finishing techniques which got him the golden opportunity to play for Belgian First Divison A at the club  Sint Truiden in 2017 and played up to the 2019-20 season. In 2020, the 28 years Ivorian forward signed a 3 and half year with Al-Rayyan SC until the summer of 2024.

Talking about his International career, he doubted the Ivory Coast on 2 September 2017 against Gabon for the 2018 FIFA World Cup.

Yohan Boli is open about his father but when it comes to his mother it is still confidential. Though, he shares happy moment pictures of them together on Instagram but hasn't disclosed anything about her. He posted a picture writing," No caption needed for this picture but just try to follow the safety rules for the good of all!! for my part I will not leave the house if you know what I mean #coronaout#momlove". 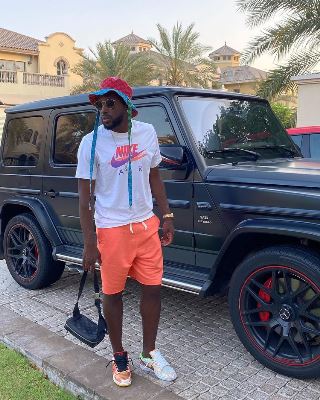 A the moment, Al Rayyan froward seems to be very focused on his career. We have no information about his past relations and any previous engagement. The player has kept his personal life low-key so we are unaware of this topic.

We will keep the tabs and update you on this topic when it's available.