Will Gordon is an American professional golfer who plays on the PGA Tour's Mackenzie Tour in Canada. The 2019 Vanderbilt University graduate, Gordon earned 2X All-SEC and led his team to the SEC title in 2017. Also, he made it to the quarterfinals of the 2018 U.S. Amateur.

Davidson, North Carolina native, Will Gordon was born on 28th July 1996, under the star sign Leo. Son of Norman and Sally Gordon, he was raised alongside his sister, Ellen. The twenty-four years holds an American nationality and is of white ethnic background. He stands 6 ft,3 in tall and weighs 205 lbs.

A matter of fact, Professional golfers are paid a percentage of the purse for each tournament they play in and finish in the money. To date, Will Gordon has earned over $121,892 playing in 11 PGA events. Outside the court, the golfer makes money from sponsorship and endorsements. Reportdaley, he is sponsored by Callaway Golf, TravisMathew, Cuater by TravisMathew, Athletic Brewing Co, and Wasserman.

As of 2021, Will Gordon's net worth is approximately $0.1 million. Besides there is no financial data available regarding the golfer.

Is Will Gordon Dating? Know His Personal Life

It's unknown if Will Gordon is currently in a relationship or single. The golf player has maintained his love life as secret as personal. Scrolling through his Instagram account, earlier he often posted pictures with a lady named Lydia Witty. around in 2018. Not only for watching games they also went vacations together. Since 2018 Gordon has not featured Lydia Witty on his IG. 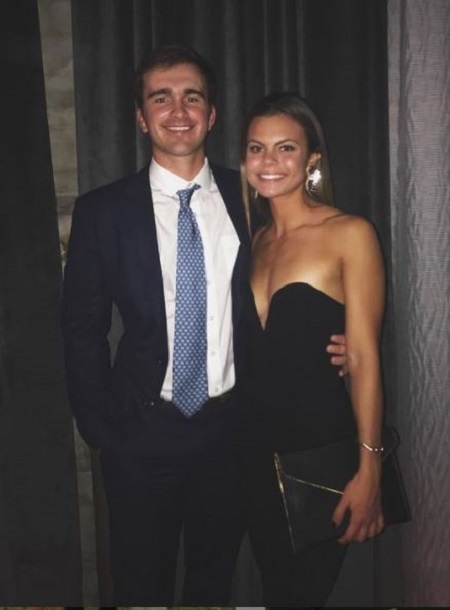 Will Gordon and his possible girlfriend SOURCE: Instagram @will_gordon

Neither Gordon nor Witty has disclosed being in a romantic relationship. The big remains today is did the two ever dated or have already secretly broke up.

Besides his favorite place to visit is the Caribbean and enjoys snorkeling. Outside the golf, he is an avid fan of the NFL's Carolina Panthers and the Davidson Wildcats basketball team. He mentioned Stephen Curry and Cam Newton are his favrioute athlete.

Began his golf career in early teen, Will Gordon was ranked the number one ranked junior golfer in the state of North Carolina for the late part of 2013 and the first of the following season after finishing in the top 10 in six junior tournaments. In 2013, he made the round of 32 at the U.S. Junior Amateur, and it to sectional qualifying for the U.S. Open 2014.

A 2013 AJGA Rolex All-America, Gordon was also a standout for his Cannon School team. Upon graduation, he enrolled at Vanderbilt University and played varsity golf.