Most celebs and athletes keep their love lives as far as they can from the spotlight, but Neymar was very open about his relationships throughout his career. And more recently, the Brazilian footballer was dating a social media influencer. Likewise, most of the women he dated in the past were public figures of some kind. The soccer star went out with many high-profile ladies, from actresses to models. And the Paris Saint-Germain player also welcomed a son with one of his exes.

Many consider him one of the best players of his era; Neymar certainly holds a massive fanbase. And as such, the talented footballer has to deal with fans following his every step. His lovelife included! So, Silva usually dates women who can handle the spotlight like himself. And in 2022, his name was linked with the influencer Bruna Biancardi. However, things between the two didn't pan out as they hoped they would; please keep reading to learn more about Bruna and the soccer star!

Neymar remains single after he and his most recent girlfriend broke up!

Yes, the handsome Brazilian athlete is single once again after he and his 2022's girlfriend, Bruna Biancardi, split. And more recently, Neymar appears more focused on his career than on finding his next partner. And since the 2022 FIFA World Cup is right around the corner, we bet that Neymar JR would instead put his hundred percent on his game than on romance. Over the years, the talented footballer dated many women with high profiles. Since being romantically connected to Neymar da Silva Sontos Jr. would come with the heavy price of losing privacy, the footballer only dated ladies with the ability to handle the spotlight.

The Brazilian soccer ace did welcome a child with one of his past lovers. On August 13th, 2011, he and his ex-girlfriend, Carolina Dantas, gave birth to his only child. Dantas and her ex-boyfriend later named their son Davi Lucca. Although the reason for his and Carolina's break up stays unknown, Davi's mom moved on and is with someone else as of 2022.

Allegedly Neymar Jr cheated on Bruna Biancardi, and they broke up!

Things for the young couple Neymar and Bruna Biancardi were going swimmingly. In fact, it was going so well that Silva even put a ring on Bruna's finger. So it made no sense why the footballer and his influencer girlfriend decided to split. And after some time after the duo broke up, rumors about the Brazilian footballer cheating on Biancardi surfaced. Although the source of the rumor stays elusive to this day, the story goes that Bruna found out that Junior was with a woman at a party. Besides him being with a lady at a party, nothing more was shared. And the night Biancardi learned about it, the social media star ended their relationship immediately. Likewise, the soccer star's ex-lover packed and left him the following morning.

Despite the breakup, Bruna hasn't deleted her pictures with her ex. And Biancardi also stated she stays fond of the footballer and his family. Even though they ended their relationship, the duo shares a friendly bond, as it would seem.

Neymar and Bruna Biancardi started with casual dating, but later, he flew her to his homeland!

The legendary footballer of his right, Neymar, and his recent ex-squeeze Bruna Biancardi started dating in early 2021. And the soccer star and the social media star kept their romantic connection on the down low for a while. Almost a year later, the PSG athlete and his lover at the time made their relationship public. Like any man and woman in love, Jr and Biancardi frequently appeared on each other's social media. 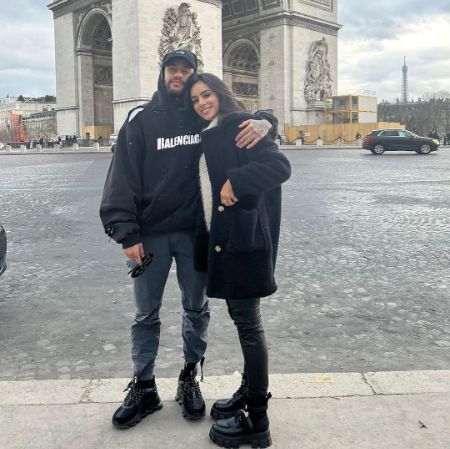 The talented footballer took his lover all over the world throughout their relationship. Silva flew his squeeze at the time to his home country to celebrate Christmas with his family. If things for the couple had gone as they had hoped, there was no doubt that Junior would have tied the knot with the Instagram sensation.

By July 2022, the Brazilian ace and his girlfriend would end things and walk a separate path. Neymar remained silent about his relationship trouble, while the social media influencer avoided using Instagram. Months after the split, Biancardi finally spoke and confirmed she was no longer in a relationship.