2017 French Junior Open Winner Whitney Osyigwe is a rising American tennis player. She has been playing tennis at the professional level since 2018. She won the ITF Junior World Champion in 2017. She was ranked at No. 1 in the junior World Ranking. She won the Orange Bowl the same year. After winning USTA Girls 18s National Championships, She qualified into the main draw of the US Open.

Whitney Osuigwe was born on April 17, 2002, in Bradenton, Florida. She is among the three children born to Desmond Osuigwe and his wife. Her father is a  teacher at the academy since 1997 and acts as her primary coach. Whitney had an older brother named Deandre, a college basketball player, and a younger sister named Victoria, who also plays tennis. There is not much information about her education qualification with the public.

Whitney Osuigwe has an estimated net worth of more than $450,000. She credits most of her net worth through her successful tennis career. Whitney has won more than a dozen titles and earned in six-figures as her prize money in her junior career. 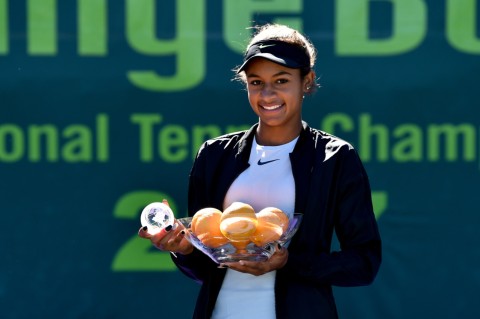 Osuigwe is very much early in her career. It's been just three years of her professional career. She will be earning much more in the days to come. In 2021, Whitney earned $109,000 as her prize money for qualifying in the Australian Open.

In 2020, She had made merely $20,000 as many tours were canceled due to the COVID. There is not much information about her endorsement deals. However, She is one of the best prospects for the upcoming days in tennis.

Whitney is very much private about her personal life. She likes to keep her personal life away from the reach of the public. Although Whitney keeps posting photos of her tours and her vacations on her social media sites, She has not posted anything related to her relationship. Whitney could be single, in a relationship, or engaged to someone.

Whitney started playing golf from a very early age. Her father remains the primary source of inspiration to her. Her father played tennis in Nigeria before moving to the United States. She won several amateur tours and events. Whitney came to international recognition in 2017 after reaching to Semifinal at the Orange Bowl.

Osuigwe ranked at No.1 after winning the 2017 Junior French Open. She was named the 2017 ITF Junior World Champion. In 2018, She made her  WTA Tour main-draw debut at the 2018 Miami Open. She had a disappointing start to her carer. In 2019, She qualified to play alongside David Ferrer for the Hopman Cup. However, they lost the match against the French team. In 2020, Whitney did not get much chance to play. She got eliminated from Kentucky Open.