Walid Cheddira is a professional footballer born in Loreto, Italy. He plays as a forward for Serie B club Bari. Despite being in Italy, he plays for the Morocco national team. Cheddira has been professionally playing football since 2015.

Further, Cheddira has played in many games for Bari and performed well. In September 2022, he received the title of Serie B Player of the Month.

Bari forward, Cheddira has a net worth of around $1.5 million. He makes most of his gains from being a professional footballer. Cheddira has a deal of €180k with his current team, Bari. So, Cheddira earns £9,000 a week and £468,000 a year. 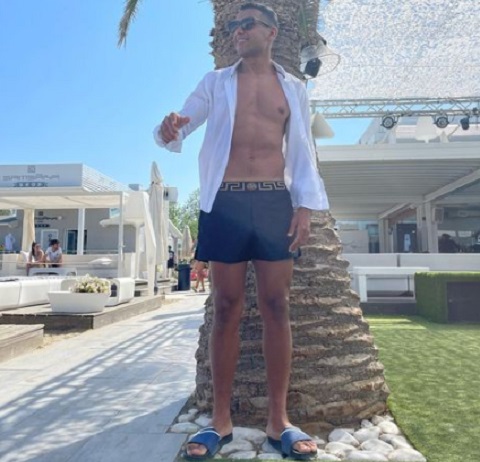 Career Overview: Is He Playing In FIFA 22?

Cheddira started his football career with the Loreto in 2015 and remained with them until 2017. From 2017 to 2019, Cheddira played with Sangiustese in 72 matches scoring 19 goals. On July 4, 2019, Cheddira signed a deal with Parma. Later, he played on loan with multiple clubs, including Arezzo, Lecco, and Mantova.

After appearing in 38 games with Bari on loan, he signed a professional deal with the squad on July 1, 2022. Besides that, Cheddira is also a national player representing the Morocco national football team, as he is of Moroccan descent.

Moreover, Cheddira is also playing in the FIFA World Cup 2022 as he is included in Morocco's 26-man squad.

Does Walid Cheddira Have a Girlfriend?

Glancing through his social media posts, there have been no records of Cheddira having a girlfriend. Many of his fans assume he is dating someone privately, as Walid has shared a photo of him with a girl with an undefined personality.

Besides that, Cheddira has been making regular posts on Instagram since 2016 but has no other posts mentioning his lover. This also shows that Cheddira is a private guy who likes to keep his matters far from media sources. So, Cheddira has kept his love matter confidential, just like another footballer Hakim Ziyech.

At present, Cheddira is at the peak point of his career, and he is fully prioritizing his career.

Walid Cheddira was born on January 22, 1998, to Moroccan parents in Loreto, Italy. His father, Aziz Cheddira, is a former amateur footballer in Morocco.

So, Cheddira holds dual nationality of Italy and Morroco. At the moment, Cheddira has not shared the identity of his mother.