Tyler Matzek is a well-known American professional baseball player. He has been playing at the professional level for more than six years. Matzek plays as a baseball pitcher for the Atlanta Braves in Major League Baseball. Tyler was part of the World Series Champion team in 2021.

Tyler Matzek was born Tyler Alexander Matzek on October 19, 1990, in Mission, Viejo, California. He is among the five children born to Jeff Matzek and his wife, Kathy Matzek. Tyler has four siblings Kyle, Mychal, Jeff and Ryan Matzek. Much about his parent profession is under the radar. Tyler graduated from Capistrano Valley High School and did not continue his formal education. Talking about his physical appearance, The player stands six feet and one inch tall and weighs 95 kg.

Tyler Matzek has an estimated net worth of more than $2 Million. He has earned most of his net worth through his successful baseball career. Although, The player has played at a professional level for more than six years but is yet to mark his name in big games. As per sources, Matzek receives an annual salary of $1,250,000 in the 2021 season. 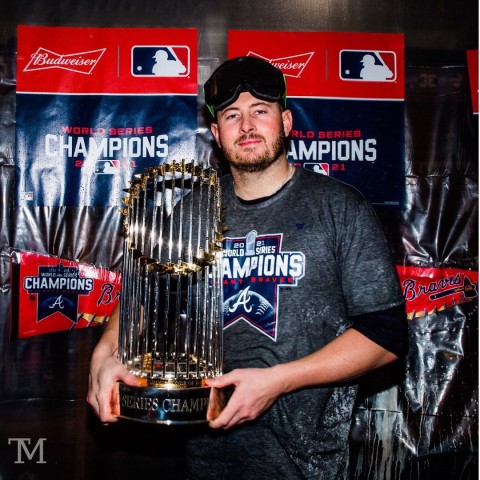 Tyler took home a signing bonus of $3,9 Million from Colorado Rockies in 2009. He spent his early days playing in the Minor leagues and earned a good amount from his career. In 2014, Matzek moved to a professional level and earned $300,000. The following season, His salary decreased to $89,092. The player did not have a major league contract for the next five seasons and made his comeback in 2019, signing with Atlanta Braves.

Tyler is married to his longtime girlfriend, Lauren. The love birds walked down their wedding aisle in 2014. They had a private wedding ceremony with their parents and close friends. The duo had been dating each other since High School. Both of them are very much supportive of each other. In 2017, Lauren underwent cancer treatment successfully. Tyler along with his wife, Lauren, at an event SOURCE: [email protected]

Although It's been more than seven years of their marriage, Tyler and Lauren are yet to welcome a new member to the family. None of them have shared about expecting their first child soon. They own a puppy named Maxwell as their pet and take care of their child.

Journey to the MLB

Tyler started playing baseball in High School and was part of the High School team. He led the California Interscholastic Federation (CIF) championship and earned the CIF Orange County Player. Colorado Rockies drafted him in the first round overall 11th pick in the 2009 MLB draft. Matzek signed a $3.9 Million contract, joined its minor league team, and played there until 2014.

Tyler made his Major League debut in 2014 against Atlanta Braves. The following season, He had an injury and had surgery. Due to this, The player lost his professional contract and moved to Chicago White Sox in Minor League. Matzek spent his next few seasons in the Minor league before signing with Atlanta Braves in 2019. In 2021, Tyler was part of the 2021 World Series-winning team.