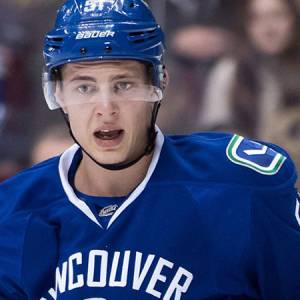 Troy Stecher is a Canadian professional Ice-hockey player who plays in the National Hockey League (NHL). As of 2019, Troy Stecher currently plays for the Vancouver Canucks as their Defence.

Stecher reportedly earns around $2,325,000 as his yearly salary from Vancouver Canucks. Further, Troy Stecher has an estimated net worth of over $1.5 million. Reportedly, he is in a romantic relationship with his girlfriend, Emma Vincent.

Troy Stecher Net Worth And Salary

Troy Stecher was born on April 7, 1994, in Richmond, British Columbia to parents Peter Stecher and Tracey Stecher. As per his nationality, he is Canadian and belongs to the White ethnic group. Further, his star sign is Aries.

Undrafted into the NHL, Stecher has been playing for three seasons for the University of North Dakota. He was honored as a Second Team All-American West, All-NCHC Second Team, and NCHC Offensive defender of the Year in his last season.

However, the details about how and when the couple started their relationship are not available. In addition, the couple has not revealed the date of their engagement and wedding in the media yet.

Further, he is living a lavish life, spending vacations in luxurious place along with his girlfriend. Additionally, the Famous NHL star is 5 ft 10 in (178 cm) in height and weighs around 86 kg.

On April 13, 2016, Vancouver Canucks signed him on a two - year contract at the entry level. Stecher was a late cut from the 2016 Canucks training camp and sent to the Utica Comets, their AHL affiliate, to start the season.

Currently, he is playing along with his star team-mates such as Derrick Pouliot, Alex Biega and many more.